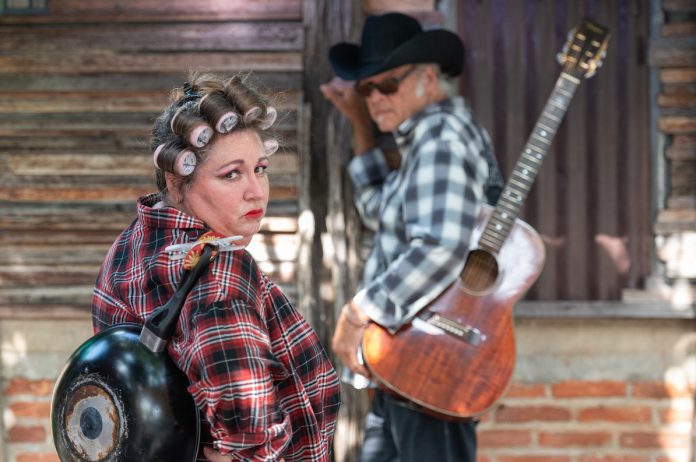 Live theatre is a rare happening in Hua Hin, so we’re in for a treat with the upcoming production of musical comedy Marg Szkaluba (Pissy’s Wife) at Le Pub Hua Hin on June 21-22. It’s a one-woman show starring Wendy Herbert, with musical accompaniment by Bill Paige.

Reprising a role she first brought to life in Hong Kong in 2009, Herbert portrays Marg Szkaluba, a farmwife living in outback Australia in the 1950s. Marg is a hard woman in a hard marriage – to a brutish lout named Pissy – and she shares with the audience a version of her rough and rowdy story through words and song.

“Marg is compelled to tell her story,” says Herbert. “At the end of the play she says, ‘If we don’t tell each other stories about what’s happened to us, we ain’t gonna learn anything or go anywhere.’ Marg finds her voice, and through that finds the courage to break free.”

Written by Canadian writer Ron Chambers, with songs by Paul Morgan Donald, Marg Szkaluba (Pissy’s Wife) follows Marg’s journey from working endlessly on the farm, watching TV and putting up with Pissy’s bigotry and violence, to finally realizing she needs to bring “astonishing” back into her life. She first tries serving exotic recipes to her horrified family, only to find inspiration – and possibly a new direction – with a clandestine singing circle.

“The audience can identify with Marg,” Herbert continues. “Not that we’ve all had a life as hard as hers, but we all know the way life can turn in the wrong direction before you even realize it. That said, Marg reflects on her hard-knock life with humour and wit.”

The show features a total of 10 songs, from the tender If You Have a Son and Stupid Tree, to the twangy Get On Your Horse And Ride and blues-tinged Hints. In the doo-wop ballad Was It Love?, Marg looks back on her fateful first encounter with Pissy behind the school gymnasium, singing “was it for kicks . . . or was it just hormones?”

Music is provided by the play’s only other character, the guitarist Mad Dog, who Marg introduces as a “scruffy bugger (who) was pickin’ soft after having his head rattled by a cowgirl”. Mad Dog is portrayed by Paige, a former music journalist who has performed solo and with bands at various Hua Hin music venues over the past four years.

“This play combines the best of dramatic storytelling with diverse, clever songs that push the storyline to an intense and cathartic conclusion,” says Paige. “My job is to support poignant lyrics that provide an important leavening to Marg’s grave dilemma.”

All in all, a rollicking evening is in store for all. Don’t miss the show!