Words such as heritage, tradition or even colonial readily come to mind during afternoon tea at the Centara Grand Beach Resort and Villas Hua Hin.

That’s because provenance; an attribute that can’t be either built or bought, is part of the fabric of the Centara. This is due to a history going back to 1923 when the resort, then known as the Railway Hotel, was opened to accommodate visitors to King Rama VI’s summer palace. This was an era of elegant opulence that’s now on show at The Museum Coffee & Tea Corner. Afternoon tea is one of the most quintessential of English customs. There is a wide selection of hotels in London offering an afternoon tea experience, including Claridges, the Dorchester, the Ritz and the Savoy, as well as Harrods and Fortnum & Mason.

Faithful to this custom, afternoon tea at the Centara offers a traditional setting with visual mementos of the past and an outlook over topiary gardens and scenic vistas towards the ocean. Afternoon tea can commence with a glass of Moet & Chandon champagne while considering the vast array of teas on offer from the more traditional English Earl Grey, Ceylonese or Indian (Darjeeling) through to fragrant Pink Flamingo or perhaps Moroccan Mint or Jasmine Queen.

TWG Tea from Singapore is featured as the island has historically been a trading post for teas, spices and fine epicurean products. TWG Tea is recognised as the finest luxury tea brand in the world with the largest collection from well over 800 different single-estate, fine harvests and exclusive tea blends from all of the tea-producing countries. Afternoon Tea began as a tradition because the English gentry preferred dinner at around 8 PM, but needed to satisfy their hunger pangs well before that time.

Following this tradition, afternoon tea at the Centara includes the presentation of a double layered platter; savory on the upper level and sweeter treats below. The traditional selection of dainty sandwiches and scones served with clotted cream and preserves is honored but with a much wider selection than would ever have been imagined in bygone days. Afternoon tea is also an opportunity to enjoy the company of old acquaintances and a great way to meet new friends. Our companions included Thanyaporn Thirawat, Public Relations Manager at the Centara (Khun Bee) who was able to take ‘time-out’ from her demanding role.

With music as a topic of conversation; we discovered that Khun Bee’s father introduced her to The Beatles and other Western popular music on the car radio when she was a teenager. One reason for the musical theme was being in the company of Centara Resident Harpist Chiara Capobianco. Chiara is a solo performer on her harp named ‘Daphne’; both being of Italian origin. Chiara was classically trained in Milan and has performed worldwide since 1990 before accepting the residency position at Centara after a holiday visit with her mother some three years ago. For Chiara a solo career is preferred over the restrictions of following an orchestra and the conductor’s demands. As a ‘free spirit’, solo suits her inclination to offer her own musical interpretations and inclinations.

As a backdrop to afternoon tea, it’s hard to imagine anything better than the gentle and understated sounds of the harp. Chiara is not restricted to classical compositions but tries to gauge the audience preferences and is eager to respond to requests. She’ll even do some homework and learn something new if a request is outside her extensive repertoire. Apart from the sort of music you may expect to be played on a harp (Für Elise or Greensleeves), also included are Thai favourites, including compositions from the King of Thailand, as well as from the Beatles, Celtic melodies or even Led Zeppelin. Khun Bee commented that for her the music of the harp conjures ‘heavenly’ images. Chiara’s version of ‘Stairway To Heaven’ certainly follows that theme.

An introduction to ‘Daphne the harp’ revealed that she is a complex instrument with 47 strings and seven pedals to give half tones to the seven-note diatonic musical scale (do, ray me etc.). Daphne weighs around 80 lb (36 kilograms) and with a value of around 600,000 THB needs to be treated with respect and care. The harp may not be as mobile as some musical instruments; however it’s just ‘place and play’, so moving between the venues of the Centara is not too hard and the harp is much more flexible than a bulky and largely immobile piano. Afternoon tea at the Centara is a pleasure for all the senses.

Guests can enjoy the sense of history and ambience of days gone by, whilst the taste buds are treated to delightful morsels and refreshing drinks. Add the pleasure of the company of an accomplished and welcoming harpist and you have all the ingredients for this Henry James quote to be realised. “There are few hours in life more agreeable than the hour dedicated to the ceremony known as afternoon tea.” (1917). 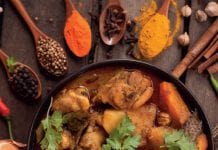 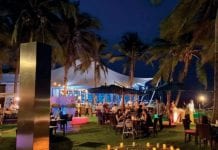 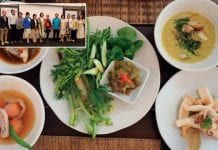