Bicycling from the border of Myanmar across the entire width of Thailand to the coast was an adventure I won’t soon forget. That the route I took was at the narrowest point of Thailand (just 12 kilometres wide) is beside the point – I can still honestly say I bicycled across the country.

“Burma to the Beach – 3 Beautiful Bays in 1 Day” was the tour I joined with Hua Hin Bike Tours. The day began at 8 AM with an hourand-a-half drive south of Hua Hin to the town of Prachuap Khiri Khan, and then to the Myanmar (formerly Burmese) border. The ride was rated “easy”, which according to Hua Hin Bike Tours’ website means “suitable for anyone who can ride a bike and can manage a bit of exercise. No routes are 100% flat, so there might be the odd climb and descent, but on the whole – easy!” I will attest that with the first six kilometres being downhill, “easy” was definitely how I’d describe the trip – at least in the beginning. The tour isn’t a race, so the pace was always nice and easy, but by the end of the journey I was exhausted. Hua Hin Bike Tours is owned and operated by the Tour de Asia Bicycle Touring Company (a licensed Tourism Authority of Thailand Company). Founded in April of 2004 by Christopher Byrd, the company offers bicycle day tours, multi-day tours, and custom tours to tourists and locals alike.

Christopher happened to lead the tour I joined. With us was a British couple living in Dubai (on their 5th outing with Hua Hin Bike Tours), and a British/Italian couple living in Italy. We also had a Thai driver, who drove us to the starting point and followed us the entire route as a “safety net” should a rider become too tired to continue the journey. The bike ride started at the border crossing between Thailand and Myanmar (currently only usable by Thais and Burmese). There is a small market known as the “Saturday Market”, because on Saturdays it is really busy! Weekdays about half the stalls are open, and there are not many people so you can really get down to some serious shopping. As the bikes were being assembled, we had a chance to walk around the market and explore.

Once the bikes were ready, we checked the seat heights to make sure we were comfortable, and had a brief introduction to how the bike worked (they worked just like other multi-speed bikes do). The downhill portion of the trip was a great way to start. We were able to take in the countryside, the coconut plantations, and the pineapple fields without having to pedal too much. Before we knew it, we were at the main highway and walked our bikes across to the other side (safety first) where we continued our journey to the Waghor Aquarium. Before going inside, we sat at a picnic table and gobbled down ice cold pineapple and watermelon – and replenished our water bottles.

The Waghor Aquarium is a part of the King Mongkut Memorial Park of Science and Technology at Waghor. Its objective is to become a learning centre for scientific marine ecology and the environment for students, the general public and tourists. After cooling off in the aquarium, we continued cycling along the coast and onto a Thai Air Force Base, stopping at Ao Manao (Lime Bay) – the first of three bays as advertised in the tour’s name. Here we had another break, and something even better – lunch! Lunch was a selection of Thai dishes at an open air restaurant across from the beach. We ate family style, and everyone was able to discuss the trip so far and learn more about each other. After lunch we continued along picturesque beach-front roads (still on the Air Force base) to the bottom of a mountain, where we had the chance to feed Dusky Langur monkeys corn on the cob.

Once the monkeys were fed, we continued along Prachuap Bay to Ao Noi (Little Bay) – our second and third bays). We ended the journey at WatAo Noi- a beautiful teak wood temple with carvings and paintings of Buddhist stories and other Thai style artwork. A monk warmly welcomed us and invited us to wander around inside the temple. While exploring the temple, the bikes were broken down and stored in the back of the van. We refilled our water bottles, had a bit more fresh fruit, and started the trip back to Hua Hin. But first, we stopped at a small market and got some beer to toast to a great day of riding. During the trip we were tracked by the support van. Knowing there was always fresh fruit, water and first aid support just minutes away was a real comfort. We were also able to leave our belongings in the van.

This was an all day outing, and I wasn’t dropped off until 5 PM. The tour is all-inclusive, we didn’t have to pay for anything other than shopping at the market. The aquarium entrance fee is covered, the lunch is covered, the food for the monkeys is covered, and even the beer at the end of the trip is covered. The “Burma to the Beach” tour cost is 3,250 THB per person. The distance we cycled was 40 kilometres (25 miles). Minimum participants two, maximum eight.

Hua Hin Bike Tours offers other day tours include Dolphin Bay to Khao Kalok, Khao Sam Roi Yot National Park, Morning/Evening Hell Ride, and the ever popular Gears, Grapes and Vineyards. Longer trips can also be arranged for the more avid biker, including a 5-day Bangkok to Hua Hin ride, a 9-day Bangkok to Ban Krut ride, and a 12-day Bangkok to the Gulf Islands ride – not for the faint of heart. 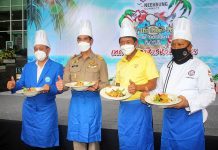