The business community of Hua Hin has begun to revive, as confidence grows that the Thai government is bringing in vaccines and easing lockdown measures. More people are resuming travelling and more entrepreneurs are organising activities to promote their businesses, many activities were of course cancelled last year. Last month The Banyan organised two events, one of which was Banyan Privilege Club’s retrospective New Year party for the members.

On 9th March, Banyan Privilege Club organised a Sunset Cocktail Party at Banyan Residences Villas Hua Hin. It was a beautiful evening and the location was spectacular. We were welcomed by a warm and joyful ‘Sa-Was-Dee’ by the staff, and on entering the residence we felt the atmosphere and joy in the fresh air, and facing the panorama of the ocean we all took the photos to commemorate the evening. The staff at Banyan Residences were very friendly, always there if you needed any assistance with a smile on their face.

There is also a big swimming pool that is facing the ocean side with beautiful scenery on the horizon. The evening was filled with a great selection of live music, delicious foods and happy faces all around.

The party was a massive success and a wonderful night, it was heartwarming to see such a sociable group of around 250 members and friends enjoying the evening together filled with great chat and laughter.

The second event was on March 20th. A delightful evening was had by a large gathering of guests at Banyan Golf Club on the Saturday evening. Hosted by Tjeert Kwant
and Banyans Stuart Daly, the BBQ buffet evening with live music and an amusing and entertaining speech by Thai actor, Vithaya Pansringarm, was very well received by those attending.

The evening followed on from the 2nd Banyan Privilege Club Open Day & Golf Classic which again proved to be a huge success. Large numbers came along to try their hand at golf for the first time and receive tuition from resident golf professional John Wither, followed by a few holes on the pristine golf course. There was also the golf tournament to be enjoyed by the members.

Numerous fantastic prizes were given out during the evening including True Arena memberships, hotel stays at Intercontinental, Holiday Inn and G hotels among others, as well as spa days at the luxurious Chiva Som resort and free golf lessons.
For many the highlight of the evening was the amusing speech by ‘Pu Vithaya’ about how he only got into acting in his fifties after a variety of other careers, and his pride at representing his country in the martial art of Kendo.

He also revealed that he will be a part of the new movie, Thirteen Lives directed by Ron Howard, that chronicles the events of the 2018 Tham Luang cave rescue of the junior football team and their coach that is about to begin shooting in Australia. 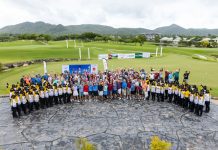 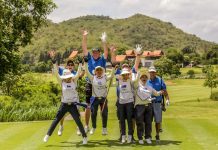