Muay Thai or Thai Boxing is Thailand’s cultural martial art and national sport. The origins of Muay Thai date back hundreds of years ago as modern-day Thai people needed a strong form of close-combat that used the entire body as a defence to fight off those in neighbouring countries who were constantly trying to invade Siam, the former name of present-day Thailand.

Although there is much discussion among modern critics as to when Muay Thai was born, there are historical signs that point to as early as the 14th century when Myanmar attacked Thailand’s old capital of Ayudhaya.

Through training and military exercises, Muay Thai techniques were sharpened, with the goal of each strike to deliver a debilitating blow to the opponent. This hand-to-hand form of combat developed by being an elemental part of the survival of the fittest.

Formal muay Thai techniques are divided into two groups: mae mai, or ‘major techniques’, and luk mai, or ‘minor techniques’. Muay Thai is often a fighting art of attrition, where opponents exchange blows with one another.

Muay Thai as a martial art is referred to as “The Art of Eight Limbs,” as it uses 8 points of contact on the body that take the place of war weapons.

For example, the shins and forearms are hardened in training to block against blows, while the hands replaced the sword and dagger. The elbow, which is considered the most dangerous form of attack in the sport as it operates as a hammer.

The knees and legs take the place of an axe and staff.

The knees and elbows are constantly looking for an opening in the opponent’s body to strike while trying to knock the enemy on the ground for the final blow.

Muay Thai fighters usually start at a young age, as the shelf-life of a fighter is rather short, due to the intensity of each fight.

Between 6-8 years of age, they may start training many hours a day, taking on their first real fight between 8 and 10 years of age. 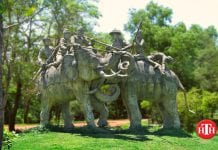