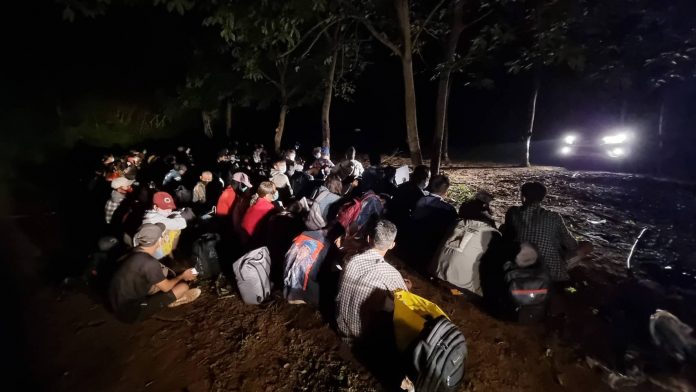 A total of 86 migrants from Myanmar were caught illegally crossing the border into Thailand in Mueang District in Prachuap Khiri Khan on Wednesday.

Some of those who were caught told border patrol officers there are up to 1,000 more migrants waiting to cross the border illegally into Prachuap Khiri Khan.

The group apprehended on Wednesday consisted of 52 men and 34 women from Myanmar, all of whom were undocumented.

The group were taken to a temporary shelter at Wat Rattanawiwek Khlong Wan where they underwent the necessary screening for COVID-19. During questioning they told officers that 1,000 others were waiting in Mudong village on the Myanmar side of the border.

The group those waiting plan to enter the province along the natural border pathway.

They come in search of work at the provinces factories and fruit processing facilities.

The 86 migrants are likely to be soon handed over to the authorities in Myanmar in accordance with an agreement which is in place between the authorities on both sides of the border.

The agreement states that any illegal migrants picked up within three kilometres of the border in Prachuap Khiri Khan can simply be handed back to the authorities in Myanmar.