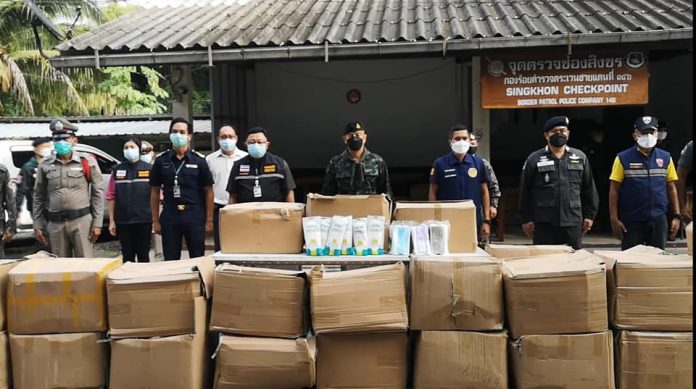 Two Thais have been arrested following the seizure of more than 100,000 face masks south of Hua Hin.

Officers from the army, immigration and customs officials acted after receiving a tip off that the haul of face masks and other protective equipment was due to be smuggled into neighbouring Myanmar via the border checkpoint at Singkhorn.

On Thursday (July 22) , officers stopped a silver Toyota pick up truck, registered in Prachuap Khiri Khan. The truck appeared to be carrying boxes of fruit but a search of the contents of the boxes uncovered a huge amount of face masks hidden inside.

Officers said the masks were about to be unloaded and put in another truck before being taken over the border to Myanmar. Officers said there were more than 130,000 pieces in total.

The suspects failed to produce official documents needed for the export of goods from the border, officers said.

The pandemic has resulted in a surge in demand for face masks both in Thailand and in neighbouring countries.

Authorities have launched a crackdown on profiteering and other attempts to exploit the situation, with vendors being handed hefty fines and even jail terms.