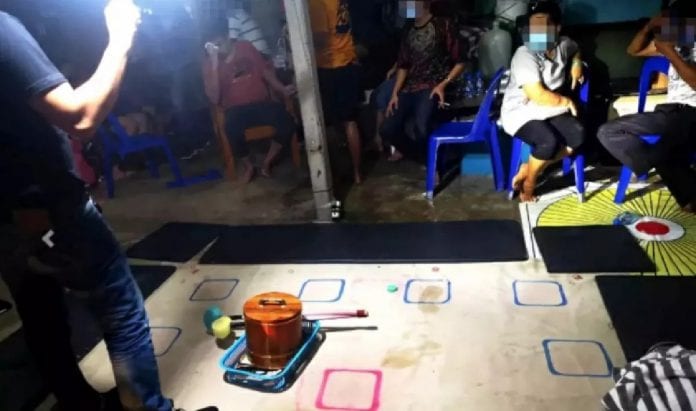 The Hua Hin Provincial Court has sentenced the organiser of an illegal casino in Pranburi two months in jail.

Twenty six other people who arrested at the casino were handed suspended prison sentences.

On June 30, Police officers of the Provincial Police Investigation Unit 7 arrested the gamblers at a property in Khao Noi Subdistrict, Pranburi District.

All those arrested were charged with gambling without permission and congregating in violation of the terms issued under the Emergency Decree, and also disobeying the Prachuap Khiri Khan Province order to prevent the spread of COVID-19.

In court, all the defendants pleaded guilty, with Mr. Gomet, the organiser, being sentenced to two months in prison and being fined 2,000 baht.

As for the defendants, the court sentenced each person to one month’s imprisonment and a fine of 22,000 baht each, suspended for one year.

Police said the casino had been open less than 24 hours before the arrests were made. Most of those arrested were known gamblers, police said, although they had not been charged previously.

The spike in cases resulted in a nationwide crackdown on the illegal casinos by the authorities.

“These places don’t have good air circulation and are full of people without their masks on. They must be avoided,” said Opas Karnkawinpong, director-general of the Department of Disease Control said in January.

“No matter if these places are legal or illegal, we must avoid them otherwise we risk bringing the virus to the family, the community.”