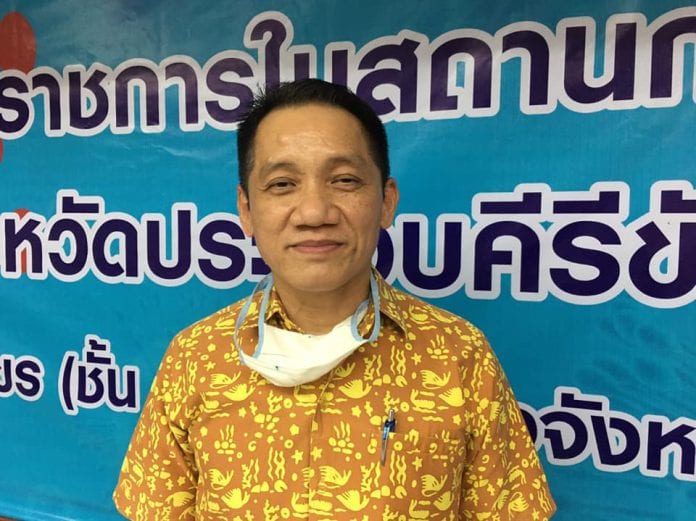 The patient is a 49-year-old Dutchman residing in Hua Hin and is being tested for Covid-19 at Bangkok-Hua Hin Hospital on 23 February.

The patient arrived from overseas and stayed in a hotel in Bangkok for quarantine and was tested on February 8, and the test was negative then he travelled to Hua Hin on 11 February.

It is speculated the patient may have been infected during his quarantine from 10 February.

He was asymptomatic, showing no kind of symptoms worrying he might be infected he checked thus finding out he is infected with Covid-19.

All the 15 close contacts he had including his wife, his children, and friends in the same party were tested, the initial results of which were all negative.

Simultaneously, officials have investigated the disease and destroyed all the infectious agents at the relevant sites.

Currently, the infected person is resting at the Hua Hin Hospital without any complications, which doctors will test for the infection again on 1 March.

The following timeline of the patient is listed below:

11-February: Rented a car, travelled from Radisson Hotel Bangkok to his house at Victory Village, Hin Lek Fai Sub District, the same day he went to pick up his son at Hua Hin International School.

12-February: Held a birthday party for his wife at the Black Mountain restaurant with 10 friends, both Thai and foreigners. Although, none of the friends had a history of travelling from aboard.

15-February: Visited the sandwich shop on the way down to Wat Khao Itisukato.

16-February: Sent his child to school, but he did not set foot out of his car and visited the Baan Sillabin restaurant without wearing a mask. Adding, he talked to the staff but did not enter the restaurant thus going to the sandwich shop.

17-February: Went to the Sandwich shop down the mountain at Khao Itisukato Temple then went to pick his child at the school.

18 February: Went to Artist Village Restaurant Khao Takiab, where there were no customers in the restaurant at those time and in the afternoon, friends from English and Norwegian came to visit him at the house.

19-February: sent his child to the school, then took the car to washed at Car Care before reaching Nong Khon Temple.

20-February; visited PTT station for petrol before Lakeview Golf Course, Cha-am district, and enter a convenience store as well. Went shopping at Yaowarat market, stay at a hotel in Bangkok and in the afternoon went to Siam Paragon. Ate lunch at a Japanese restaurant and also visit a watch shop.

21-February: returned to Hua Hin by stopped at the PTT station between Samut Sakhon and entered a convenience store.

22-February: went to a sandwich shop at the entrance to Khao Itisukato Temple, then went to the food court at Blue Port Hua Hin and enter the supermarket in the mall to buy fresh food.

23- February: went to a stone shop near the outlet at Cha-am, and then next went to check for COVID at Bangkok Hospital Hua Hin, and in the afternoon met with friends at the Centara Hotel Hua Hin, then after that for food at Chef Jack, near Nikotaram Temple.

24-February: went to Villa Market at Index Living Mall Hua Hin then went to a clothing store, Ice cream shop inside the mall. And In the afternoon check-in at Hua Hin Hospital.

The reason we need to inform the COVID patient because it is crucial to monitor his schedule which can help to trace the history and block the spread of the disease effectively.