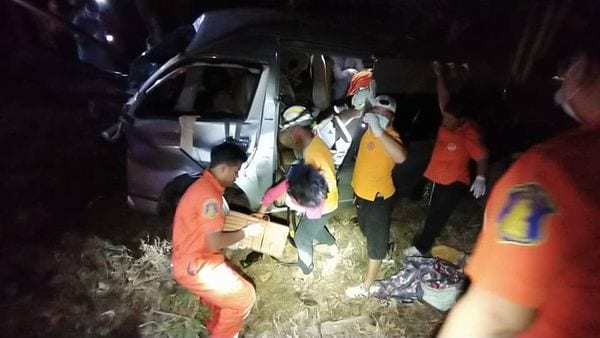 Early morning of 11th Dec, a tragic accident occurred at km 282+600 at Ban Nong Ta Suea, Kui Buri subdistrict when a van fell into a drain in the middle of the road killing 3 and injured 7 others.

Police and rescuers rushed to the scene where a Toyota van fell into a drain in the middle of the road  and found the victims. Three female were pronounced dead including a 2-year-old girl and 7 others were seriously injured.

Some of the passengers were still stuck in their seats and rescuers had to use a cutting machine in order to bring them out. They were all taken to Kui Buri Hospital for treatment. 50-year-old Mr Charoen Makchuay, the driver of the van suffered injuries on both legs.

One of the passengers, Mr Sayan Than- Hueng said he and his relatives were travelling from La-Mae District in Chumphon to attend a bird racing event at Nakhon Nayok province. The accident was likely caused by the driver that may have fell asleep on the steering wheel. Further investigation is being made.