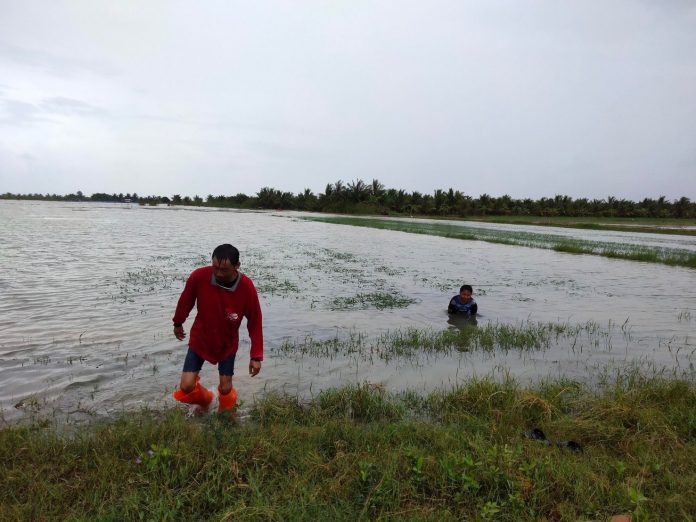 The recent and persistent heavy rainfall throughout Prachuap Khiri Khan has left more than 500 rai of rice fields flooded in Sam Roi Yot.

The rice, much of which had only been planted 20 days earlier, has been destroyed.

Farmer Prasopchok Kongthong said that more than 40 rai of his land had been flooded and estimated a loss in revenue of around 2,000 baht per rai.

Mr Prasopchok predicted that it would be at least one month before he would be able to plant rice on the land again.

The worst hit areas were the rice fields in Village No. 5 and Village No. 2 in Rai Mai Subdistrict.

The headman of Village No. 5, Mr. Siri Inprasit, said a lack of drainage was a contributing factor to the rice fields flooding. He said that whenever there is heavy rainfall the area floods due a lack of drainage ditches in the fields.

Mr. Siri called on the relevant agencies to urgently begin dredging land in order for all the floodwater to drain into the sea.

He said that if the area experiences more rainfall other farms and livestock could be affected by flooding.

In a further setback, it was discovered that some farmers were not formally registered with the district agricultural authority which means they may not be eligible for compensation or could result in delays in receiving compensation.

Meanwhile, Thailand’s Meteorological Department has forecast scattered thundershowers throughout much of next week.