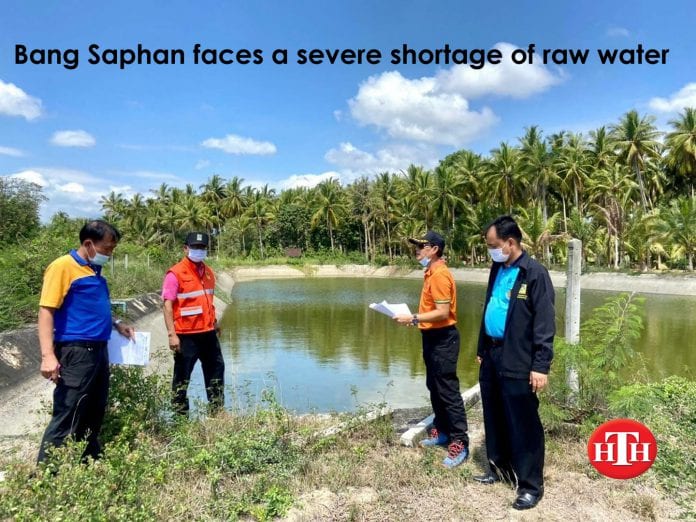 11th March, Prachuap Khiri Khan – Mr Decha Ruand-on head of the Department of Prevention and Mitigation (DDPM), led the Prevention and Operation officer, and together with the DDPM area 4 in planning to prepare the installation of remotely water pump.

This to pump water into the water supply system in order to fix the issue of the drought problem for people in Ron Thong Subdistrict Municipality.

Bang Saphan Branch Regional Waterworks to distribute to people in Bang Saphan to solve this issue and alleviate the trouble to people who lacks water.

Chang Reak reservoir has a capacity of 1 million cubic meters and is a raw water source for producing tap water in the areas of Bang Saphan District and Bang Saphan Noi District.

Furthermore, the deputy is planning to dredge the reservoir to able to store water up to 2.2 million cubic meters, then ordered the Provincial Administrative Organisation to bring the heavy machinery to the dredging tank as soon as possible to resolve the problem of people with water shortage.

Afterwards, the deputy governor went to explore Khlong Toei Reservoir, Moo 1, Chang Reang Subdistrict because he received complaints from villagers the reservoir could not hold water for use.

It was found that there was no water in the tank for 4-5 years. Which the deputy governor thinks it might be a leak and assigned the Irrigation Office Explore facts urgently and asked the Chang Reak Subdistrict Administrative Organisation to allocate a budget to quickly resolve this problem.

The immediate vicinity of the old tank is a watercourse line surrounding the area, creating a new reservoir that can hold an estimated 300,000 cubic meters of water.

Provincial Waterworks Authority Manager at Bangsaphan branch Mr Sirichai Sawat Aree announced in the event of drought the supply of raw water is shorted, causing not enough for the production of tap water.