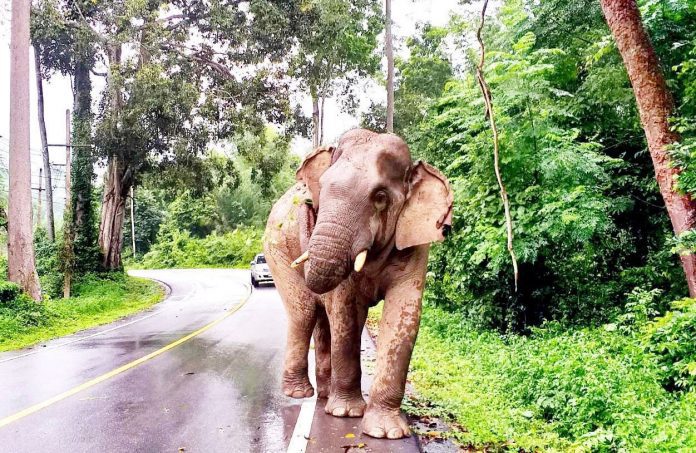 Officials are considering using bees as one of a number of measures aimed at preventing elephants from raiding crops and damaging property in Hua Hin.

And the idea isn’t nearly as far-fetched as it sounds.

Elephants – the world’s largest land animals – are scared of bees.

Just think about that for a minute.

While the stinger of one bee can’t do much harm to the thick hide of an elephant, a swarm of hundreds of bees can inflict serious pain, particularly if they sting sensitive areas such as around the mouth, eyes and trunk.

Such is the disturbance that elephants feel from bees, conservations around the world use them as a way to prevent conflicts between the behemoths and humans.

And now officials in Hua Hin want to do the same thing.

A meeting chaired by Mr. Komkrit Charoenpatanasombat, Deputy Governor of Prachuap Khiri Khan Province, discussed ways to resolve some of the problems caused by elephants in Hua Hin, and nearby Kuiburi. Most of the issues centre around the elephants in Kaeng Krachan National Park which have been invading farmland and damaging property in Huai Sat Yai Subdistrict in Hua Hin.

In April, two locals were attacked and killed by wild elephants in two separate incidents.

Elephants often encroach onto farmland in search of food and water.

In a bid to protect their crops, farmers try to scare the elephants and chase them off their land.

However, this can result in the animals becoming aggressive and charging at the farmers.

Officials have now drawn up an eight point plan, which will be presented to the provincial governor, that aims to prevent and resolve some of the problems with elephants in the area in both the short and long term.

The plan is as follows:

Meanwhile, the deputy governor warned officers from related agencies to closely monitor the situation in the coming months.

May and June are peak times for pineapple and durian harvesting, with the abundance of fruit potentially attracting elephants to the area which are in search of food.