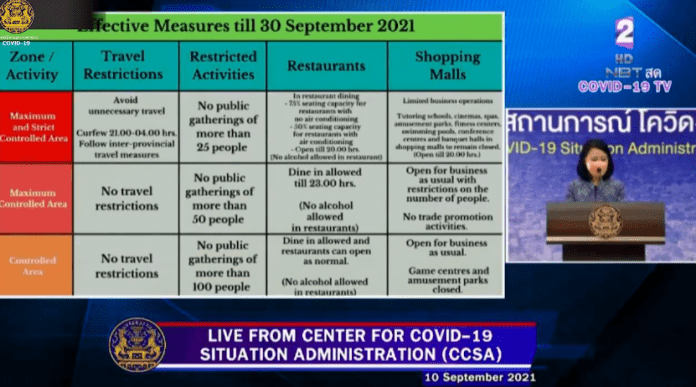 BANGKOK (NNT) – The Center for COVID-19 Situation Administration (CCSA) has maintained an order against traveling beyond one’s home between 9pm and 4am until September 30, in the 29 Red provinces, which includes Prachuap Khiri Khan.

At Friday’s CCSA meeting chaired by Prime Minister Gen Prayut Chan-o-cha, an adjustment to measures was discussed ahead of the two-week mark since the most recent change to protocols, on September 14. The adjustment accounts for changes to vaccine dispersal in October to include children, and to zoning in accordance with the Ministry of Public Health suggestions.

The meeting decided to maintain the 29 red zone provinces, 37 maximum control provinces, and 11 controlled provinces as well as their respective measures.

Among them is the curfew barring travel outside the home between 9pm and 4am, a call for offices to utilize Work from Home arrangements, and a shuttering of entertainment venues. The CCSA called for the imposition of COVID Free Settings and for Universal Prevention to be promoted.