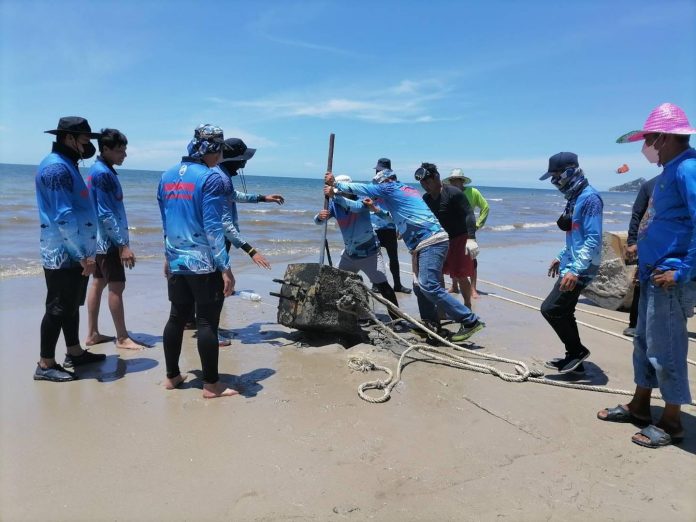 Damaged water marker buoys and jellyfish nets are to be replaced after concerns were raised about tourist safety on Hua Hin beach.

On Friday (June 17) Dr Sathien Charoenruen, Governor of Prachuap Khiri Khan Province, and other relevant officials visited an area of the beach in front of Baan Laksasubha Resort Hua Hin to inspect the buoys following complaints the buoys had become damaged and were a danger to people swimming in the sea.

It is thought the buoys, which include nets aimed at keeping jellyfish away from the shoreline, had been damaged during high winds and monsoon weather conditions.

Officials heard how some of the netting had recently become entangled in the propellers of boats, while there have also been reports of tourists being injured after stepping on the damaged steel base of the safety buoys. Over the weekend and on Monday (June 20), a total of nine buoys were recovered rom the beach – all of which were damaged.

Hua Hin Municipality is now working with the Department of Marine and Coastal Resources (NTC) to try and locate more of the damaged buoys.

In addition, the jellyfish or so-called ‘stinger nets’ will also be replaced.

In 2017, the Department of Marine and Coastal Resources used a budget of 4 million baht to install nets to protect swimmers from jellyfish.

The nets were installed approximately 100 metres from the shore on the beach in front of Baan Laksasubha Resort Hua Hin and at Hua Don Beach in Khao Takiab.

The beaches of Hua Hin and Cha am have always suffered problems with jellyfish (Chysaora), especially after prolonged heavy rain when the creatures come to float in the water close to the shore to feed.

Chysaora, also have the nickname ’Sea Nettles’, due to an extremely venomous sting in their tiny tentacles, the sting is released when they come into contact with human skin.

Those stung say the poisoned area feels like it is on fire, becomes swollen, red, blistered and cracked and in severe cases can cause the victim to suffer shock, breathing difficulties and even death.