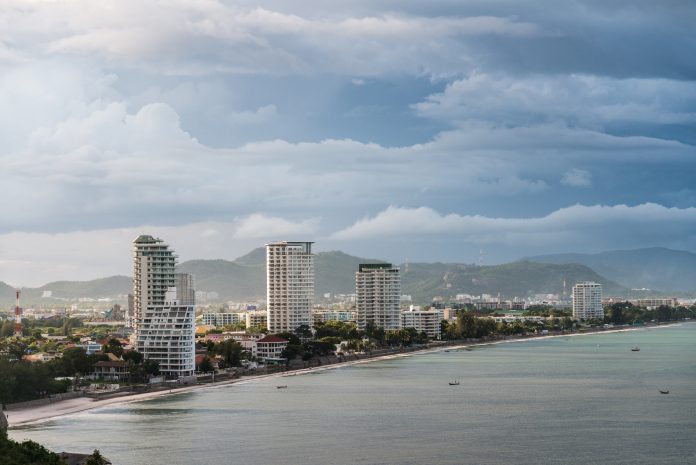 Demand for beachfront condominium units in Hua Hin has meant the price of land along the beach can be as high as 150 million baht per rai.

Mr. Phatarachai Thaweewong, Director of Research and Communications at Colliers Thailand said that the price of beachfront land in Hua Hin has forced developers to find alternative locations closer to the town centre and away from the seafront in order to build condominiums.

Over the last ten years, the condominium market in Hua Hin, Cha-am, and Pranburi has seen a total supply of 71 new condominium projects, 29,152 units, with a total development value of 123,700 million baht, Mr. Phatarachai said.

Following the huge floods in Bangkok, people sought a second home away from the capital and as a result Hua Hin, Cha-am, and Pranburi gained attention from buyers, which prompted major stock exchange listed developers to develop a large number of new condominium projects, many of which were able to close sales quickly.

A 1 bedroom layout of 25.0-30.0 sq.m is still a popular model followed by developers as it is favoured by customers who are looking to buy a second property which is mainly used at weekends.

The average selling price per square meter of condos sold in the Hua Hin area on the seaside remains the highest in the first half of 2022, at 130,300 baht per square metre.

However, some beachfront condos with a seaview view can have average selling prices as high as 370,000 baht per square meter. Units such as these are often sell very quickly as they are in such limited supply, , and those units were attracted by the purchasing power level because the group of customers sees these supply, Mr. Phatarachai said.

Mr. Phattarachai stated that in the last 2-3 years, most developers have focused on condo developments on the mountain side of Hua Hin, where land prices are lower compared to Hua Hin’s coastal area.

Mr. Phattarachai also said that due to the scarcity of available land, prices on Hua Hin seafront have risen to more than 150 million baht per rai or 375,000 baht per square wa.

Colliers’ report stated that there is still a lot of interest in the condominium market in Hua Hin, both in terms of supply and demand. This is reflected in sales of new projects which have been launched this year, such as Sansiri’s Hay Hua Hin project, located close to Soi 112, where 90 percent of units have already been sold.

The condominium market in Hua Hin remains particularly popular among Bangkok based buyers who purchase condos for investment or for use as a second home.

However, in terms of foreign buyers, units were mainly being bought by Chinese and Russian buyers.

The selling price of units from major developers in Hua Hin have risen approximately 8% per year, which will also help to attract more buyers looking to buy property in the region as an investment.

A different story in Cha Am

While the condo market in Hua Hin has seen robust growth both in terms of supply and demand, it’s a different story in Cha Am.

Mr. Phattarachai warned that developers in Cha Am should postpone the release of new projects.

“Developers in the Cha-Am area should postpone the release of new projects because there is still a large supply of condominiums for sale in the area, the majority of which are completed projects, and there are still units for sale in the market,” Mr. Phattarachai said, adding that it was a similar situation in the condominium market in Pranburi.