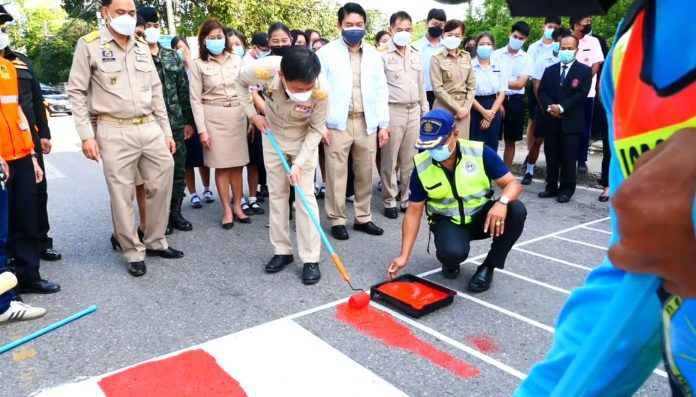 The Governor of Prachuap Khiri Khan, Mr. Sathien Charoen Rian is implementing measures to improve road safety across the province.

As part of a new road safety campaign launched this week (Feb 24), law enforcement and relevant agencies have been told to strictly enforce traffic and road safety regulations throughout Prachuap Khiri Khan.

Particular focus will be put on those who drive while under the influence of alcohol, people driving beyond the speed limit and those riding a motorcycle without a helmet. The governor also ordered the relevant agencies to upgrade the pedestrian crossings in all of the province’s eight districts, which includes Hua Hin.

The improvements will see the speed limit clearly displayed on the approach to each crossing, with warning signs also added to say that pedestrians may be crossing the road. The road surface at each crossing will also be improved, with new markings added so they are clearly visible for pedestrians and drivers. Railroad crossings and crossings in other high risk areas will also be upgraded, Mr. Sathien said,

The campaign, which has been launched in conjunction with the Road Safety Directing Center and the National Road Accident Prevention and Reduction Policy Committee, will also include a publicity day on the 21st of each month to further raise awareness on the importance of road safety.

Schools and other local educational institutions will hold activities to teach children about road safety.

The campaign will also aim to educate drivers about the importance of slowing down when driving in community areas, educational institutions, medical institutions, crowded traffic zones, crossroads, and crosswalks.