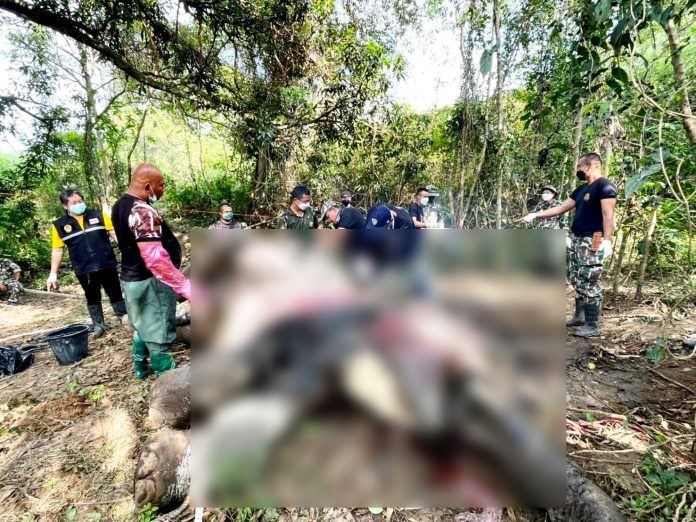 An elephant has been found dead with a gunshot wound in Kuiburi National Park.

The elephant, which is thought to have been dead for about 5 days, is believed to be between 15 to 20 years old.

The elephant, which weighs around 3 tons, was found in a creek in the Hub Phueng area.

Mr Pichai said officers used a metal detector to scan the elephant’s body and found what was thought to be a bullet in the hip, close to the elephant’s tail. There was also inflammation to the abdominal cavity, near the lumbar spine and extending to the right pelvic region, as well as tearing of the abdominal wall in the abdomen and pelvic area.

The veterinary team initially assumed that the wild elephant died as a result of abdominal inflammation and infection.

A sample of the elephant’s stomach was sent to a laboratory to help determine the cause of death.

They then sent a sample of stomach food scraps to a laboratory to determine the precise cause once more. Meanwhile local monks were invited to hold a ceremony for the elephant.

Police said they are investigating the elephant’s cause of death and will bring those responsible to justice.