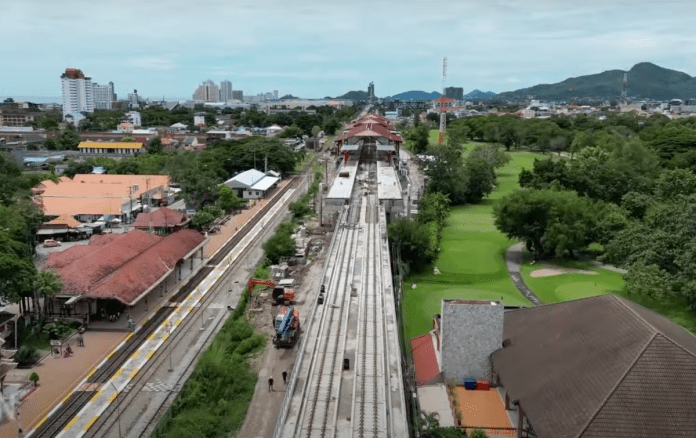 A local drone enthusiast and YouTuber has shared the latest video in his fascinating series documenting the construction of the new dual track rail line in Hua Hin.

Since April 2021, Michael Brown, and now more recently Geoff Renouf, has been uploading a monthly video to his Mike’s Tropical Tech YouTube channel showing the progress of the construction of the new train line.

The video Geoff uploaded in August, sees his drone take flight from Soi 10 and continue above the train line to Soi 56. The video reveals that many of the ramps and overpasses which will be used by motor vehicles are now in place and appear to be close to completion.

From Soi 68, the drone shows the elevated track, which in total stretches some 4 kilometres and forms part of the construction of the new train station.

The video also shows the progress that has been made in the construction of the train station, with the roof, paneling and decorative facades now in place.

As the drone continues to fly south, you can see the result of the demolition of the structures that were located alongside the train line from Soi 94, at the back of the Market Village and towards BluPort.

The video ends with a flight over the train line at the Sea Pines golf course, which shows the new Suan Son Pradit train station, as well as the new overpass, which is already in use.

In May, the Department of Rail Transport (DRT) announced that a major section of the new dual track rail line in Hua Hin was now more than 99 percent complete.

According to Dr Pichet Kunadhamraks, deputy director-general of the Department of Rail Transport, the 84 kilometre stretch of the rail line that connects Hua Hin with Prachuap Khiri Khan is now 99.870 percent complete.

The section of the track in Hua Hin forms part of the line that will eventually connect Nakhon Pathom with Chumphon, a distance of 421 kilometers.

Once completed, the dual track railway will transform travel from Bangkok to Phetchaburi, Hua Hin and eventually all the way to Thailand’s deep south and the border with Malaysia.

While not to be confused with the high speed train which had been mooted for Hua Hin (those plans remain firmly on the drawing board at present) are set to be significantly faster than the current rolling stock.

The new dual track train line is expected to be operational by mid-2023.