In addition, 1 case was found from someone who had travelled from abroad.

Of the 22,921 cumulative total cases in the province, 364 are currently receiving treatment in hospital, while a total of 1,613 have made a full recovery and have already been discharged.

Health officials say 10 patients are currently in a serious condition in hospital, while 354 are in what is described as a moderate condition in the hospital.

A further 263 people are at Home & Community Isolation or are staying in quarantine.

Meanwhile, health officials have announced 932,034 doses of a COVID-19 vaccine have been provided in Prachuap Khiri Khan.

Meanwhile, the fourth dose for medical personnel has begun, with 8,448 persons receiving it so far. 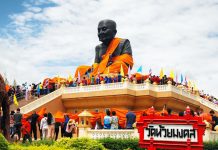