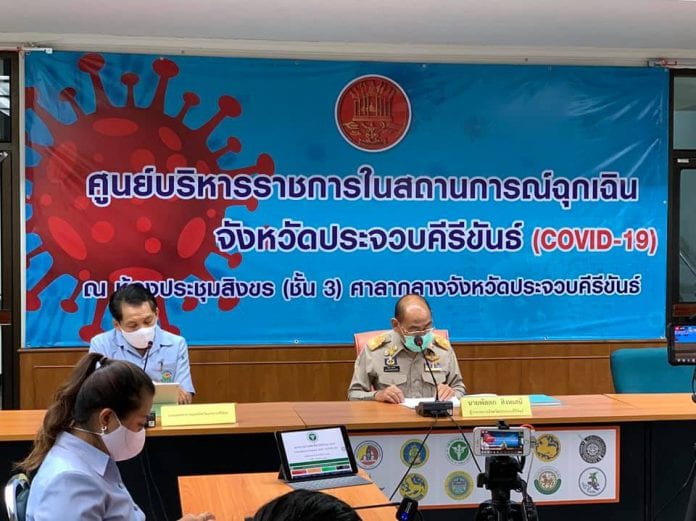 The 4th case is a 4-year-old boy with no symptoms and was detected on 9-March. The boy is a brother to a 2-year-old girl who is the third patient who travelled from Samut Sakorn Province to visit relatives at Hua Hin District and is now resting at the Hua Hin Hospital.

The 5th case is a 25-year-old Myanmar man from Dawei province, who escaped into the city at the Thai-Myanmar border nature channel in Ao Noi sub-district and was arrested along with another 32 Burmese people as of 3-March.

In the first test, the infection was not found but the 2nd test revealed signs of Covid and currently getting treatment at Prachuap Khiri Khan Hospital, in additionally, six to eight cases of COVID-19 were from Myanmar from Yangon and were in the same group as the fifth case.

For the fourth patient, the test was done to four close contacts: mother, grandfather, grandmother, and uncle, and all results are negative.

The authorities were at high-risk groups involved in the arrest of 128 immigrants, who had all tested secretions in the laboratory and found none but had to quarantine themselves for 14 days.

And now, there are still 10 people still waiting for the results, expect to know the results by tonight.

As for the outpatients, it still implements strict surveillance measures to screen all clients.

The governor of Prachuap had confidence that Prachuap Khiri Khan Hospital is well prepared for COVID 19 patients, the COVID 19 vaccine is expected to be delivered to Prachuap Khiri Khan in June to be administered to medical personnel and staff, office outpost and groups of patients with chronic diseases first.