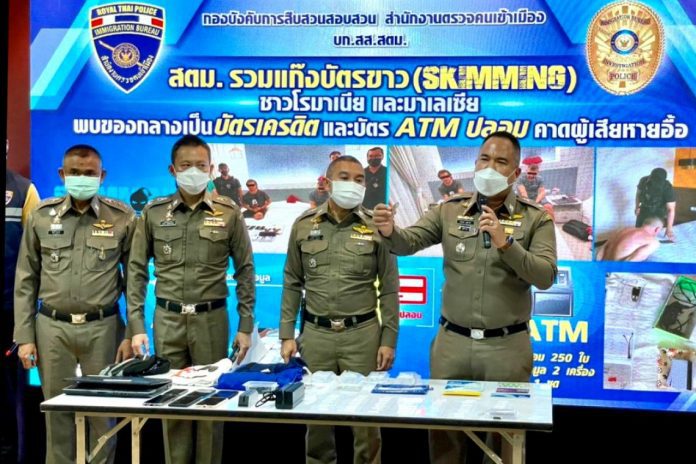 Immigration police said at a press conference yesterday that they had arrested a skimming gang who were operating in the Sathorn area of Bangkok and in the seaside resort of Hua Hin over the last three months.

Gim was arrested at a beachfront hotel in Hua Hin and his accomplice was nabbed nearby.

Their arrests followed complaints from customers of Kasikorn Bank that their accounts had been used despite ATM and credit cards always being in their possession.

Gim was caught with 209 “white cards” two of which had had data placed in them so they could be used to withdraw cash. He had a data adding machine. His accomplice had 28 cards and another machine and other equipment and bankbooks.

In skimming a machine is inserted into an ATM that reads data, which is then put on blank cards later and used to withdraw funds.

The pair admitted skimming and said they operated in tourist areas of the Thai capital and Hua Hin.

They would skim in the early hours of the morning then withdraw money late at night.

Siam Rath said there were many victims of the pair who are now in custody facing fake card charges.