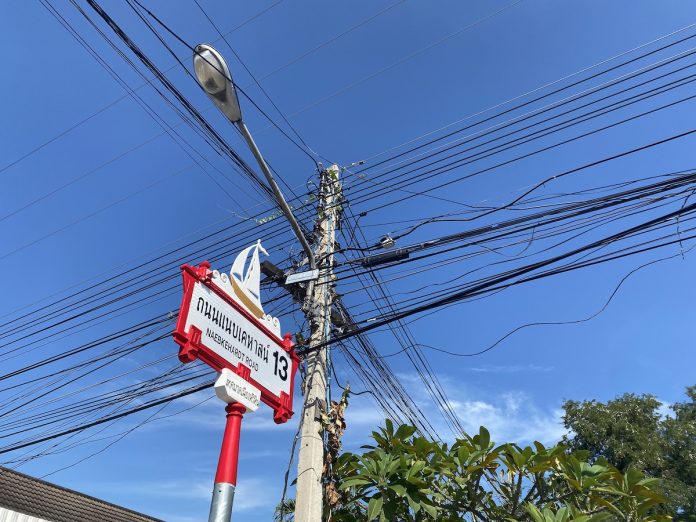 Hua Hin Municipality has begun drafting plans which would see the removal of some of the unsightly cables that hang over the town’s streets.

The move would see the cables buried underground in certain areas throughout Hua Hin.

Earlier this month, Mayor of Hua Hin Nopporn Wutthikul, presided over a meeting with representatives from Mida Prime Group, the Provincial Electrical Authority and other related agencies to discuss the requirements for moving the cables underground.

The meeting wanted to determine the best areas to begin the work to bury the cables, and which areas would benefit most, from an aesthetic view point, by having the cables removed.

The areas at Naebkehart Road and Damnoen Kasem Road were highlighted as good starting points.

For reference, Naebkehart Road is the road that runs parallel to the beach and is where well known venues such as Coco 51 and the Putahracsa Hua Hin Resort are located.

Damnoen Kasem Road is the road that runs alongside the Hua Hin train station and the Royal Hua Hin Golf Course.

The plan to bury the cables underground is one of the policies of the “HUA HIN WOW” project, which has been included in the municipal development plan for the fiscal year 2023.

After the cables on Naebkehart Road and Damnoen Kasem Road are removed, the municipality eventually wants to bury all cables throughout Hua Hin and Nong Kae underground.

A priority for removal are the cables on the major travel routes to the beaches which are currently an eyesore due to the large number of cables suspended in a disorderly manner.

The areas are also subject to regular blackouts and disruption of services particularly when it is raining – a problem which would happen much less frequently if the cables were underground.

The municipality sees the move as further helping to improve the image of Hua Hin for both residents and tourists.