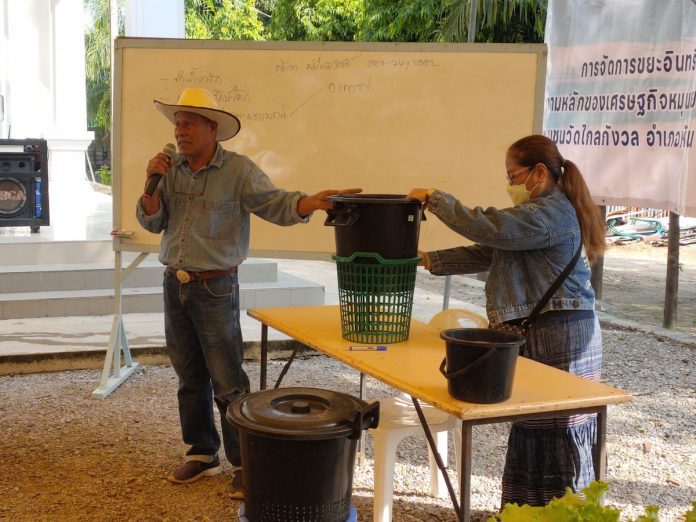 Residents of a community in Hua Hin are being encouraged to compost their food waste and cut down on disposing of it in their household trash.

If you’re unfamiliar, composting is the act of turning food scraps and other materials into a nutrient soil. It’s one of the easiest ways to help the environment.

The project enables residents of the Klai Kangwon community to dispose of food waste in a compostable basket rather than in the municipal bins along with other trash.

The scraps will then be used to build healthy soils and grow nutritious food rather than send the nutrients to the landfill.

The project is part of the municipality plans to improve the city’s environment and be more sustainable. According to agricultural specialist Mr. Sakda Muensawat, who gave the demonstration to residents, whenever a household has fresh food scraps they are to be placed in the baskets for a period of 15 days.

Thereafter the scraps can be used as organic fertilizer to help grow a variety of vegetables such as lettuce, kale, morning glory, and others that are free of toxic substances.

In addition, the fermented water produced will contain beneficial microorganisms that can be used to water the trees, branches, and petioles of small, medium, and large trees without the use of expensive chemical fertilizers, Mr. Sakda said.

The composting project at the Wat Klai Kangwon Community will serve as a pilot before it is rolled out to 39 other communities throughout the district.