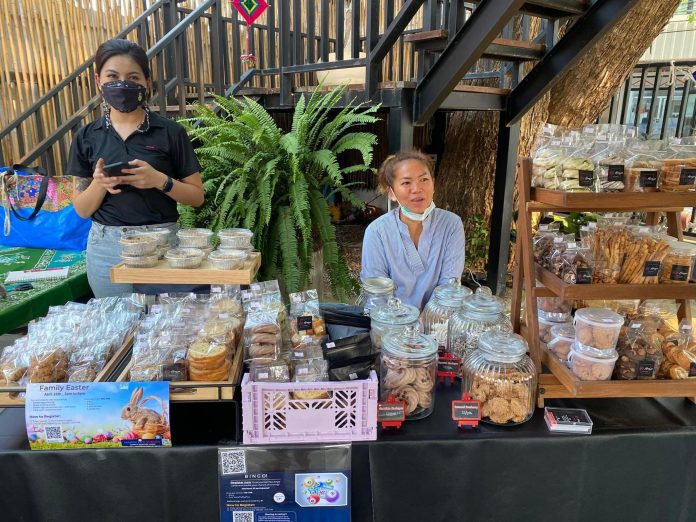 A new farmer’s market where the focus is on sustainability is helping to raise donations for underprivileged communities in Prachuap Khiri Khan and Phetchaburi.

The Growing Green Communities charity event will take place on Sunday May 8 at the Amara Garden Resort on Soi 94.

The event, which is being organised by the Sang Foundation, features organic produce from local farmers, handmade crafts and a dog and cat adoption service.

There is also live music and a delicious buffet dinner for 500 baht per person.

The event also invites children from underprivileged communities in the area to take part in activities such as Boran muay Thai and art workshops. “I’m a diver and I saw the dramatic change in the corals in the waters I was diving in such as in the Philippines, the South China Sea and the waters in Southern Thailand,” Mutsumi Adachi, founder of the Sang Foundation, told Hua Hin Today.

Mutsumi then decided to set up the Sang Foundation and later linked up with the United Nations in Bangkok which helped to raise the profile of her campaign.

She was also involved in putting on educational programs to schools in Thailand about the damage being caused to marine life from plastic.

As lockdowns resulted in schools being closed and she was unable to continue with the educational programs, Mutsumi became aware of the hardship many local communities faced during the pandemic.

It was then that Mutsumi began to use the Sang Foundation as a vehicle to donate food and other essentials to those in need in Pranburi, Hua Hin and Cha Am.

“In total we made over 60,000 donations in one and half years but then I started to realise that this was not a good solution”, Mutsumi said.

Mutsumi explained how the money she raised through the Sang Foundation went to buy goods from supermarkets and high street stores which would then be handed out as donations.

“Everytime we bought the goods, we were giving so much money to the big corporations”.

Mutsumi said all the goods they were handing out as donations was also generating so much plastic waste – which was actually in contrast to the reason the Sang Foundation was set up in the first place.

The donations also resulted in some social issues which Mutsumi had not expected.

“Some of the people became dependent on our donations which meant they did not need to return to work”.

The Sang Foundation then worked with Scholars of Sustenance which collects leftover food from hotels and restaurants to donate to the communities.

It wasn’t until recently that Mutsumi had the idea of an altogether more sustainable approach to food donations in Hua Hin.

“I didn’t want to buy food from the big corporations to be used for donations, so that is when I had the idea of buying produce from local farmers. “We give the kids healthy food and drinks, toys, clothes and second hand books. At the last event we had almost 200 children and parents from underprivileged communities attended”.

Mutsumi said the psychology behind inviting those who are receiving the donations to the event is to make them feel respected and part of the wider community, rather than only seeing themselves as people who rely on donations.

The Sang Foundation is looking for volunteers who can help set up the event, help on the day or collect donations.

For more information about the Sang Foundation visit https://sangfoundation.org/

More information on the Growing Green Communities event can be found on Facebook: https://www.facebook.com/events/520588009591092