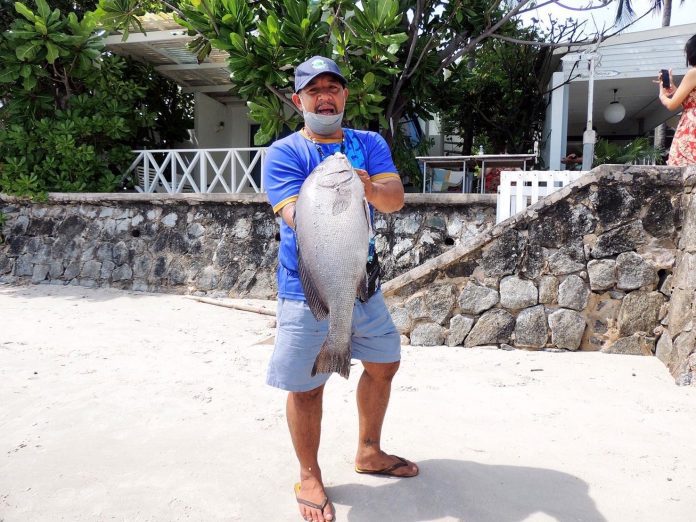 Hua Hin beach was a hive of activity on Sunday as people flocked to catch fish that were much closer to the shore than normal.

The reason being that excess rainwater, including discharge from dams and rivers, washes into the sea, altering the chemical balance in the seawater resulting in a reduction in oxygen levels. This in turn means that the fish are forced closer to the surface in order to try and breath.

It is a phenomenon that roughly translates to “squeezing water”, with previous years seeing thousands of fish washed onto the shore after oxygen levels plummeted.

This year has not been nearly as bad with far fewer fish actually washed shore. Instead, fish were much closer to the water’s surface, meaning they were easier to catch.

That meant that entrepreneurial minded locals were able to capitalise on the situation.

One local said he was able to catch some fish, less than expected but some fish nonetheless, including one weighing 2.5kgs, which he said he would be able to sell for 250 baht.

A 12 year old boy said he was able to catch 10kgs of blue crabs and small fish.
Meanwhile, the professional fishermen were able to use their small boats to catch between 50 and 100kgs of fish, which they could sell for 200 baht per kg.

The phenomenon is expected to end in a couple of days once oxygen levels in the water return to normal.