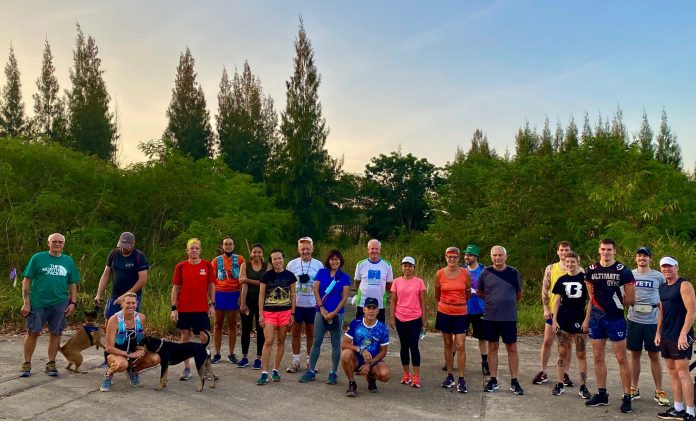 Sport can help bring people together and for members of a group in Hua Hin, walking and running has been a route to being more active and meeting new people

Every Saturday morning a group of expats and Thais meet up to run, walk and explore the trails and less beaten paths around Hua Hin and the surrounding area.

The Hua Hin Trail Runners, which started as a way for founder Paul Van Slyke to improve his own running speed and endurance has evolved into a popular group fostering fitness and friendship among the expat community in Hua Hin.

The group, which is organised via a Facebook group of the same name, is just over a year old, but now boasts more than 700 members.

“It was around December 2020, I put out just a general post on Facebook asking if anyone would be interested in starting a running group”, Paul told Hua Hin Today recently.

Only one person replied to Paul’s post, which was Nutcha Phalee (Khun Lek), who isn’t just an accomplished runner but a professional who recently completed a gruelling 164 kilometer race in Chiang Mai.

“We met at CoffeeClub in BluPort and talked about starting the group,” Paul explained.

In the weeks that followed, more people started joining the group and meeting up on a Saturday and it went from there.

Paul, 51, says that between 20 to 30 people typically meet up on a Saturday morning.

The meeting point and routes are decided beforehand with a Google Maps link to the location posted in the Facebook group earlier in the week.

The group is a mixture of keen runners, jogging enthusiasts and walkers of all ages, abilities and fitness levels.

Those that run, run, and those who just wish to walk, walk. Everyone is welcome.

“Even if you don’t think you are a runner, you should still come and join us anyway and start off walking”, said Paul.

“In my opinion, walking is probably better for you and can still help you get in shape and burn a lot of calories.”

After running or walking on a Saturday morning, the group often go to Paris Bakery on Soi 102 for a well earned coffee and croissant – or two. Another member of the Hua Hin Trail Runners, 63 year old Markus from Switzerland, says he enjoys being a part of the group as it has enabled him to meet new people and other runners living locally.

Fellow Swiss expat, Nic, 60 also says Hua Hin Trail Runners has enabled him to meet people who share the same passion for running and being active as himself.

“When my friends ask me what I do for exercise and to keep in shape, I always recommend Hua Hin Trail Runners”, Nic says.

The Hua Hin Trail Runners meet every Saturday morning at 6.45am.
There is also a weekly running session held most Tuesday’s at 5pm.

You can find the Hua Hin Trail Runners on Facebook