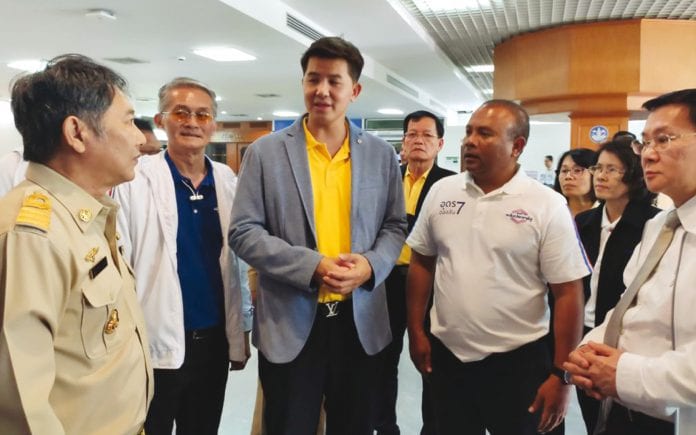 The Deputy Minister’s visit, inspection and review of the development plans was made in the company of the Deputy Permanent Secretary of the Ministry of Transport, the Inspector-General of the Ministry of Transport, the Director of the Hua Hin Airport, the Prachuap Khiri Khan Provincial Police Commander, the Hua Hin District Chief and Mr. Montri Chupu, Deputy Mayor of Hua Hin.

Many other political leaders and community representatives were also present. It is understood that visit was prompted after local repre- sentations were made to the governor of Prachuap Khiri Khan  and the plans being considered at a recent cabinet meeting held in Kanchanaburi.

Central to the submission was the need to stimulate tourism and the economy in the province; including designating Hua Hin airport to become fully international. Mr. Atirat discussed the current limitations including the runway length of 2,100 metres, a width of 35 metres and an aircraft parking area of 160 metres long and 80 metres wide.

This means that it can only accommodate 300 passengers per hour. There is only one current scheduled flight per day, four days per week between Hua Hin and Kuala Lumpur. The Department of Airports (DOA) is the Thai government department under the Ministry of Transport.  It operates 28 civil airports throughout the country; including Hua Hin.

The plan is mooted for completion by 2022 and will allow for many more domestic and international flights to treble the number of passengers. In July this year Hua Hin Today had the opportunity to meet with Hua Hin Airport Director, Mr Apisit Ubolkomut, who outlined this situation and revealed these plans.

The transport ministry is understood to have approved these ideas to develop the airport into a major domestic and international tourism facility.   In August 2018 The AoT director-general Darun Saengchai stated that 3.5 billion baht was allocated to upgrade the airport.  It could see Hua Hin move in the direction of becoming the hub of the much vaunted “Thai Riviera” and part of measures to develop the area from Hua Hin south.

This very public visit by an important government minister can only be regarded as a positive sign that the proposed plans will soon become a reality.  Announcements of the next stages and signs of construction are now eagerly awaited. It has also been announced that Airports of Thailand (AOT) will spend 393 billion THB on the expansion of six other airports as part of its investment plan for 2017-33, the company’s president, Nitinai Sirismatthakarn, said.

The plan, already approved by the board, aims to boost the airports’ capacity to serve a total of 243.7 million passengers. The budget covers the construction of a passenger terminal in the north of Suvarnabhumi Airport, which will boost the airport’s capacity by another 40 million passengers per year.  It also covers phase 3 of Don Mueang Airport’s expansion and phase 2 of the Chiang Mai Airport expansion. He added that AOT could afford the huge investment, due to its financial strength. AOT runs six international airports: Don Mueang, Phuket, Chiang Mai, Hat Yai, Chiang Rai and Suvarnabhumi.