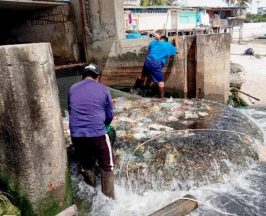 Hua Hin Municipality has installed drainage nets to catch and collect garbage at various points along beaches throughout the district.

The municipality is hoping the nets will provide a simple and cost-effective solution to deal with the discharge of waste from drainage systems.

On Wednesday (Aug 11) Mr. Jeerawat Prahmanee, Permanent Secretary of Hua Hin Municipality, along with officials from the Sanitation Technician Division inspected the nets, which had already collected a significant amount of trash.

Mr. Jeerawat said that particularly during the monsoon season, a large amount of trash is washed into the local drainage system.

The nets have been installed at the mouth of the Khlong Samor Rieng drainage gate, as well as Saphan Pla Pier and at Wat Khao Lan Thom in Khao Takiab.

The nets have stopped a large amount of trash, including a lot of foam and plastic from entering the sea, Mr. Jeerawat said.

Mr Jeerawat asked for cooperation from people in Hua Hin to refrain from dumping garbage into water sources and sewers in order to preserve the natural beauty of the beach.

The the use of drainage nets to stop trash from polluting waterways and beaches originated in Australia. However, similar nets are used on numerous khlongs in Bangkok after the Bangkok Metropolitan Administration (BMA) carried out a campaign to install the nets in 2019.