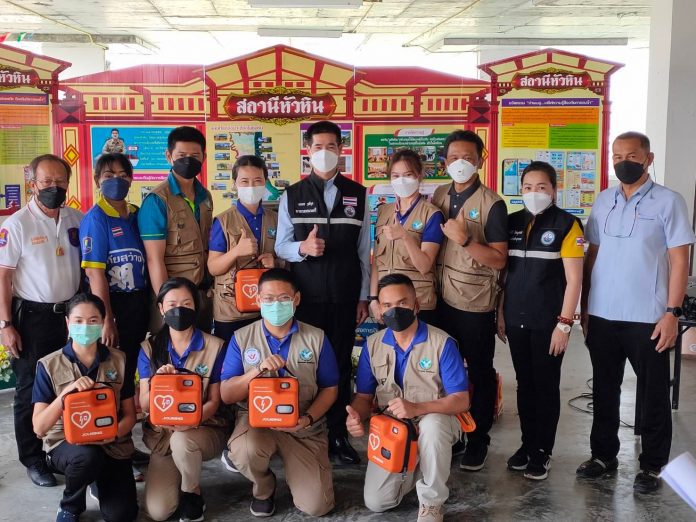 Hua Hin Mayor Nopporn Wutthikul formally opened the Child Drowning Prevention Project, which gave training to more than 50 people on what to do in the event a child gets into difficulty while in water.

The seminar, which was organised by by Mr. Theeraphan Jadpol, the General Director of the Department of Public Health and Environment in Hua Hin Municipality was attended by beach operators, sea protection volunteers club, municipal officials, teachers, and staff of the Takiab Child Development Center, and a group of local parents. The seminar included training from members of the Sawang Hua Hin Foundation and officers from the Royal Thai Army Sergeant School who gave lectures and demonstrations on water safety.

Mr. Nopporn praised the project, stating that because Hua Hin has a beach it is important that people who have been properly trained are able to assist should a drowning incident occur.

The mayor presented certificates to those who participated in the training, while further training will be given on an ongoing basis, the municipality confirmed.

In Thailand, drowning is the leading cause of death among children under the age of 15.

According to the World Health Organisation, Thailand records more deaths from drowning among children than any other country in ASEAN, and its death rate is more than twice the global average.

On average, around 1,200 children in Thailand die due to drowning each year, or approximately 3 children per day.

Most drowning deaths typically occur during the summer school holidays between April and May.