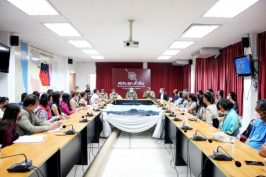 Police and municipal officials have met almost 100 restaurant owners and food vendors to warn them against breaching the rules regarding the sale of alcohol.

Those attending the meeting were told in no uncertain terms they face prosecution if they were found to be serving alcohol.

Currently only venues in Hua Hin and Nong Khae with SHA and SHA+ certification can serve alcohol.

The meeting was held after provincial officials announced recently that they had been made aware of many venues serving alcohol in breach of the current rules.

Earlier this month, Prachuap Khiri Khan provincial governor Dr. Sathien Charoenruen has ordered a crackdown on venues in Hua Hin and throughout the province breaching the rules regarding the sales of alcohol.

Dr. Sathien said some venues were serving alcohol in coffee or opaque cups in order to try and conceal what was inside.

Meanwhile, Hua Hin mayor Nopporn Wutthikul has instructed municipal officers to ensure that street traders were not obstructing fire exits and access routes for ambulances in the run up to New Year celebrations.

Mayor Nopporn also ordered officers to visit beach vendors to ensure they do not price gouge tourists and that they were transparent with the price of food.