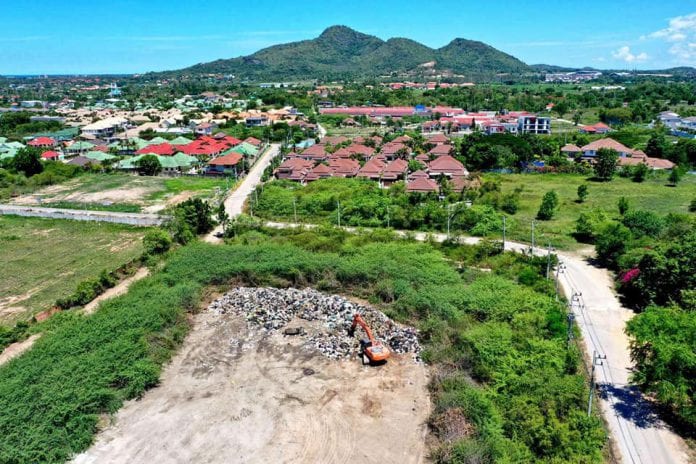 A new garbage dump on Soi 102 is causing a big stink for some residents in Hua Hin.

Late last week, Hua Hin’s Mayor announced that an eight rai plot of municipal land on Soi 102 would be used as a temporary land fill site.

The move came after a twenty year agreement the municipality had with the operators of a landfill site located near the Thanarat Military Camp in Pranburi ended on the July 1.

Plans had been put in place to transport trash collected in Hua Hin (which averages up to 180 tonnes per day) to a site in Phetchaburi. However, the plans were shelved at the shelved at the eleventh hour.

With nowhere to dispose of Hua Hin’s trash the Municipality settled on the plot on Soi 102 as a temporary measure until a more suitable site could be found.

However, just days into the site being used, which is located approximately 300 metres behind the popular Suksabai 3 housing development, residents are up in arms about the foul smell emanating from the site. On Sunday (July 4) local residents met with Hua Hin’s Deputy Permanent Secretary, Dr Siwat Boonkerd, to voice their concerns about the landfill site which has suddenly appeared on their doorstep.

Dr Siwat said he understood the concerns of the residents but stressed that site will be used only temporarily until a more suitable location can be found.

Residents said that the site is almost adjacent to some properties and that the smell is overbearing, especially when the wind is blowing in the direction of the homes.

Some people said the smell made them feel dizzy and nauseous.

Dr Siwat said that a ‘hybrid nano’ disinfectant will be sprayed over the trash pile in order to stop the foul smells.

Dr Siwat added that the situation is being monitored by local public health officials to ensure there is minimal impact on the environment.

On Monday, municipal officials confirmed to Hua Hin Today the spraying of disinfectant on the trash had already begun.

Do you live near the garbage dump on Soi 102? Are you a local resident affected by the issue? If so, we would like to hear from you: visa@huahintoday.com