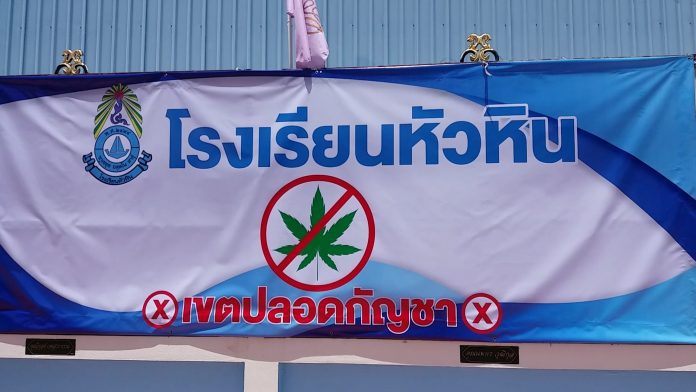 Hua Hin School has banned the sale of food and drinks that contain cannabis or cannabis extracts, as well as prohibiting recreational use of the drug on school premises.

Mr. Suchart Priprem, director of Hua Hin School, revealed that the school has now strictly complied with the Ministry of Education and the Ministry of Public Health policies for educational institutions to become cannabis free zones.

Mr. Suchart also said a program will begin to educate the school’s 2,400 students on both the benefits and risks of using cannabis and hemp.

Mr. Suchart reiterated that food and drink containing cannabis are strictly forbidden in the school.

He asked the teachers at the school to serve as role models for students in order to create a society free of the negative effects of cannabis and hemp on children and young people.

On Friday (June 24) Hua Hin School will sign an agreement with other schools in Hua Hin aimed at keeping schools free of cannabis and helping to educate children on the dangers of marijuana and hemp.

The news comes after the Ministry of Education recently issued a new set of regulations aimed at preventing abuse of cannabis and hemp among students and teaching staff.

In addition, the Thai government set new rules limiting access to cannabis and hemp to people aged at least 20, after the recent decriminalization of the drug sparked concerns regarding consumption among young people.