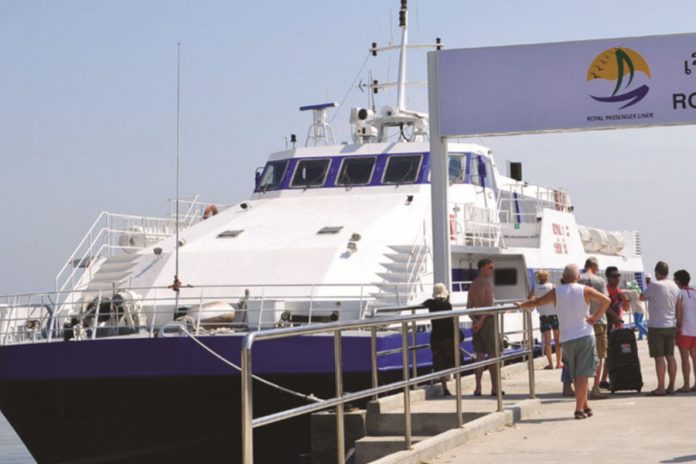 The Hua Hin to Pattaya ferry service has officially ceased operating, it has been announced.

The service, which had been operated by Royal Passenger Liner Co., Ltd was suspended in March 2020 following a lack of passengers due to COVID-19.

However, Pattaya’s Mayor on Tuesday (Aug 10) confirmed the service has now officially ended.

The agreement to cancel the contract will be granted once the company carries out renovations on the port in Bali Hai to return it to a normal dock.

Royal Passenger Liner Co., Ltd launched the service in 2017, operating two catamaran ferries capable of carrying 150 passengers each. The service operated from the pier in Khao Takiab, Hua Hin to Bali Hai in Pattaya, taking around one and a half hours per trip. However, even before COVID-19, the service experienced some difficulty with regards to passenger numbers and never being particularly popular with tourists, with the service often less than half full of capacity.

With uncertainty regarding when Thailand’s tourism industry will return to pre-pandemic levels, Royal Passenger Liner Co., Ltd submitted the formal request to cease operating the service.

Earlier this year, another company – the The Seahorse Ferry Co. Ltd – announced it would operate a car ferry service between Sattahip in Chonburi and Songkhla in southern Thailand.

A stop in Prachuap Khiri Khan was due to be added at a later date.

The total journey would be more than 600kms and take approximately 20 hours.

The shallow waters around Hua Hin means it would not be possible for a vessel the size of a car ferry to dock in Hua Hin, meaning a stop further south in Prachuap Khiri Khan was needed.

However, despite undergoing some test runs, the launch of the service has been hampered by the restrictions placed on travel issued by Thailand’s Center for COVID-19 Situation Administration (CCSA) aimed at limiting the spread of COVID-19.