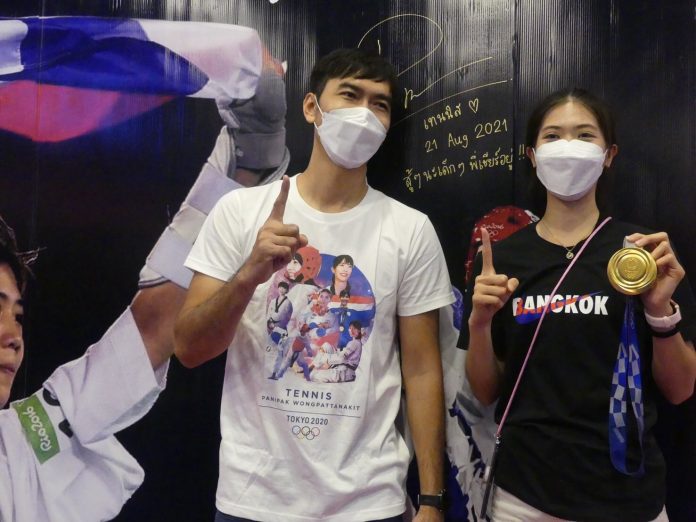 Hua Hin welcomed Olympic gold medal star Panipak Wongpattanakit on Saturday (Aug 22) as the Taekwondo star paid tribute to her first coach, who is based in the town.

Nong Tennis said Coach Songsak first began teaching her taekwondo in 2011 and just 10 years later she was an Olympic champion.

Mr. Nopporn presented Nong Tennis with a bouquet of flowers and said she was a great example to young people not only in Hua Hin but throughout Thailand.

Coach Songsak said that he is immensely proud of Nong Tennis’ success.

Coach Songsak said that all his students has the potential to go on to become an Olympic champion, providng they train hard and practice

Panipak’s triumph was only the third discipline that Thailand has won an Olympic gold medal in, having previously accumulated five in weightlifting and four in boxing.

For Panipak it completes a collection of gold medals from major international tournaments including the Youth Olympics, world championships and Asian Games.

Despite winning bronze in Rio in 2016, Panipak was so upset and despondent that she considered quitting the sport for good.

However, despite a brief two-month hiatus, she returned with the goal of winning gold in Tokyo.