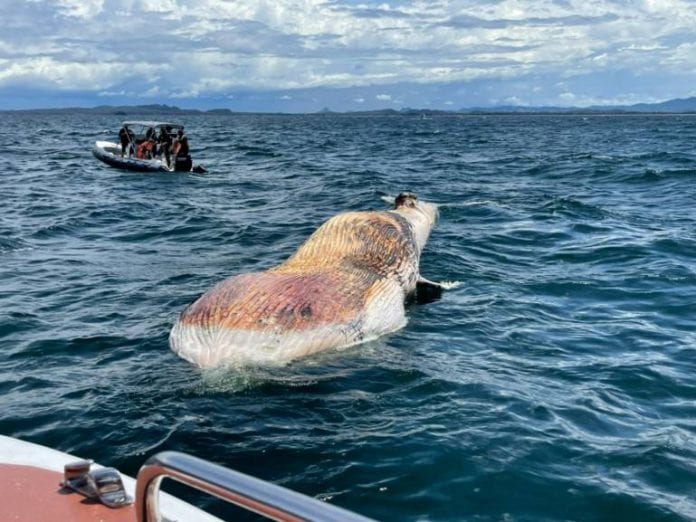 The carcass of a Bruda whale or Bryde’s whale was found floating off Koh Talu in Prachuap Khiri Khan on Wednesday (June 30).

The whale, estimated to be about 10 meters long, was found floating approximately 5 kilometers off the coast of Koh Talu, which is located within the Ao Siam National Park.

Officials from the Department of Marine and Coastal Resources sent veterinarians and staff from the Marine Resources Research Center to recover the carcass.

The whale is estimated to have been dead for about a week.

Officials said they were able to expedited the recovery of the whale carcass by dragging it to the coast of Bang Saphan Noi District where it will be examined and an autopsy carried out to determine the cause of death. The Bruda whale is classified as a rare marine animal and is on the verge of extinction. It is listed as a reserved animal under the Wildlife Preservation and Protection Act B.E. 2562, with trade in the whales outlawed.

Officials from the Marine Resources Research Center and the Upper Gulf of Thailand The Department of Marine and Coastal Resources said they have been studying and categorising the population of the Bruda whales in the waters off Prachuap Khiri Khan since 2010.

Officials said they have photographed and been able to distinguish more than 60 Bruda whales throughout the Gulf of Thailand.