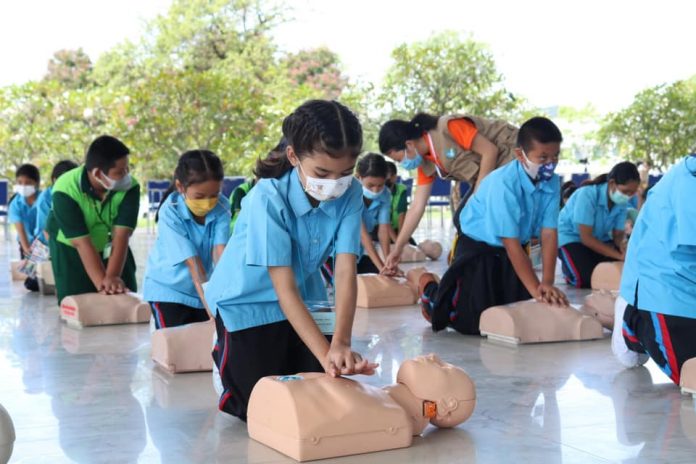 More than three hundred grade 5 and 6 students in Hua Hin are now more confident in how to deal with a serious medical emergency after learning some potentially life-saving first aid skills.

As part of the training, a total of 360 students were given hands-on training in cardiopulmonary resuscitation, CPR, and the use of an AED (automated external defibrillator).

They also took part in a team building exercise and a float swimming course, as well as learning other survival skills.

The students were given the training from a total of 40 instructors, who included volunteers from local rescue organizations, officers from the Army Sergeant Major Training School and representatives of hotel operators. Hua Hin Muninciaplity has made some good progress in preventing incidents of drowning among children and adults.

In March, Mayor Nopporn received a ‘Merit Maker’ award on behalf of the municipality from Mr. Anutin Charnvirakul, Deputy Prime Minister and Minister of Public Health.

The project to reduce the number of deaths by drowning was rolled out by the Ministry of Public Health in accordance with United Nations’ Resolution on Global Drowning Prevention.

Since the start of the project, Thailand has reported a significant reduction in the number of children who have died as a result of drowning.