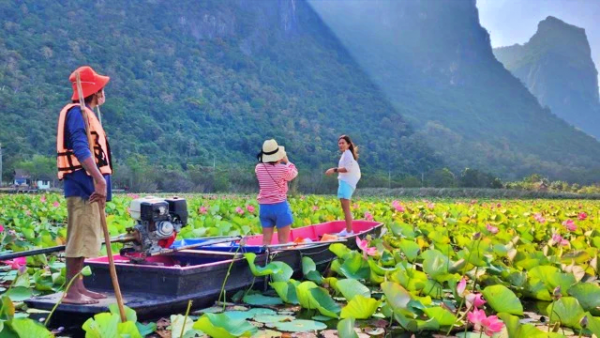 At the start of every year a lake in Sam Roi Yot turns pink with blooming Lotus flowers.

The phenomenon, sometimes referred to as the Red Lotus Sea, normally lasts about three months from around the final week of December or early January to the end of March.

This year’s bloom sees the aquatic flowers bring a vibrant pink carpet of colour to the lake, against the spectacular limestone mountains that stand prominently behind it.

The flowers grow in a huge lake amongst 26,000 rai of land located at the Bueng Bua Nature Education Center at Khao Sam Roi Yot National Park. Early January sees the first bloom of the flowers. However, February and March is typically when the lotus flowers are at their most stunning.

Tourists can take a trip around the lake using the Rong Je village community boat tour. There are 15 boats available, each of which can seat up to 5 people. Boat rental starts at 500 baht and takes roughly an hour round trip along the Bueng Bua Nature Trail. The boats are operated by locals who have knowledge of the history of Thung Sam Roi Yot and can offer advice on the locations on the lake where you can take the best photographs.

Tourists who visited the lake during the New Year holiday said they could not believe how beautiful the area was, not only the stunning flowers but also the surrounding mountains.

In addition to the boat trip, there is a wooden bridge with walkways of 220m and 540m, while a large octagonal pavilion offers a place to relax and enjoy the beautiful scenery with a 360-degree view of a large freshwater field.

In addition to the lotus flowers, there are other aquatic plants and a birding site which is home to more than 300 species of waterfowl, including teal, egret, red herons, and purple swamp-hen, which can be seen all year round.