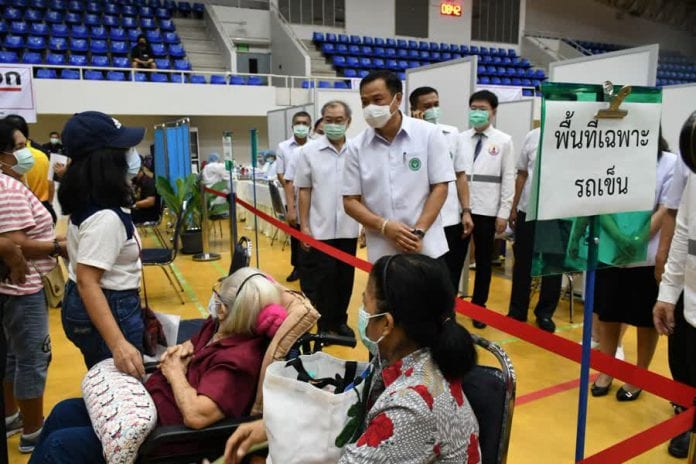 BANGKOK (NNT) – The Minister of Public Health has revealed Thailand’s vaccination campaign exceeded its 6 million jabs target in June, with the supply of 10-12 million doses expected this month.

Run by Thammasat University Hospital, the vaccination center is currently able to vaccinate 2,000 people daily. This capacity can be increased to 3,000 jabs daily with a greater supply of vaccine.

The Minister of Public Health said Thailand’s inoculation campaign had exceeded its 6 million jab target for June, with 8 million doses given.

He said the campaign is still on track with the supply of 10-12 million doses planned for July, with 1 million doses from Sinovac delivered yesterday.

The Ministry of Labour is also proceeding with its vaccination drive for insured workers under the Social Security scheme. The Minister of Labour Suchat Chomklin today inspected a vaccination center located at Mitr Phol Sugar Corporation‘s office in Bangkok, which serves Social Security insured persons with appointments.

So far, the Social Security’s vaccination drive has given COVID-19 jabs to some 520,000 workers, including around 20,000 migrant workers.

The Social Security Office is now considering the distribution of allocated doses to industrial areas such as Rayong, Chonburi, Ayutthata, and Nakhon Pathom, with the distribution expected in August.

On compensation for construction workers at locked-down camps, the Minister of Labour said the first round of payments should be processed on Monday 5th July, along with the rollout of new aid measures for affected restaurants and construction workers.

He said the Phuket Tourism Sandbox campaign, officially started yesterday, created 4,000 jobs in the area in the month prior to the official reopening, while the success of the campaign could endlessly lead to further positive developments.