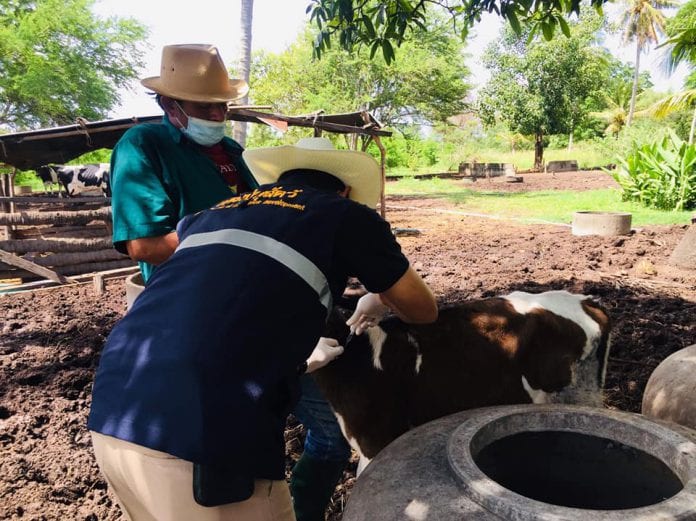 To date, 2,400 cattle in the province have been infected with the disease, of which 413 have recovered and 128 have died.

The outbreak has occurred in every district of Prachuap province, with new sick animals found mainly in Hua Hin and Mueang districts, officials have said.

Cattle belonging to a total of 678 farmers have been affected by the outbreak.

Now, district livestock officials have been visiting the area to monitor the treatment of sick cows and give advice and spray pesticides on farmers’ farms.

Officials from the Department of Livestock began vaccinating cattle in Kui Buri, Thap Sakae and Muang district on June 29

Vaccinations will also be given to healthy animals in farms within a 5 to 10km radius of where outbreaks have been located in order to control and prevent further spread of the disease.

The vaccine rollout in Prachuap Khiri Khan will be part of a project to vaccinate thousands of cattle throughout Thailand.

The Department of Livestock Development has set aside 30 million baht in order to secure 100,000 vaccine doses to be administered to cattle nationwide.

Last month, outbreaks of lumpy skin disease were reported in 41 out of 76 provinces across Thailand.

The disease is transmitted by blood-feeding insects, such as mosquitoes and ticks.

While it can not be transmitted to humans, people are advised to avoid eating meat from an animal infected with the disease.