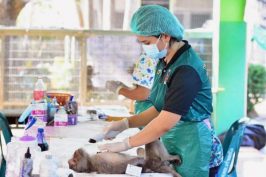 Veterinarians have begun a mass sterilization program in a bid to tackle the ever increasing population of macaques annoying local residents and tourists in Phetchaburi.

Officials from the Ministry of Natural Resources and Environment hope the move will control the number of long tailed macaques that live in Mueang district.

Officials say there are as many as 3,000 macaques living in central Phetchaburi, and at least 1,000 living in each of the other districts in the province.

Locals have complained that the macaques are a nuisance and can even be a danger to people.

Some people have complained that the fearless macaques have stolen mobile phones and sunglasses from tourists and damaged property nearby.

There are also concerns regarding hygiene and disease, with macaques able to carry rabies. Now officials have said they will aim to control the population of macaques in Phetchaburi through the sterilization program. The macaques will also be screened for diseases, officials said.

For years the macaques have annoyed locals, often stealing food and damaging property.

A former teacher in Phetchaburi told Hua Hin Today how he had the shock of his life when he returned home from work to find a macaque rummaging through his wardrobe after it forced open a window in his bedroom.