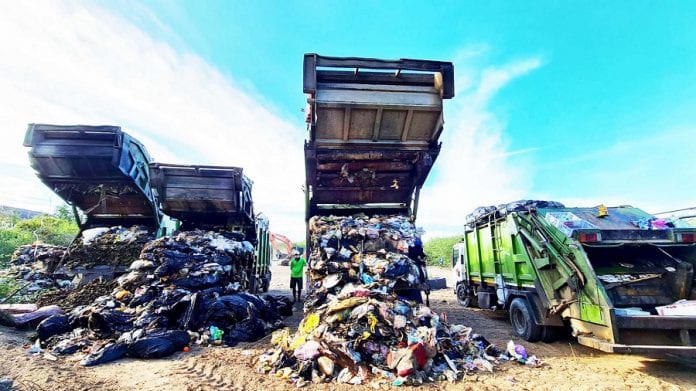 Hua Hin Mayor Nopporn Wuttikul has said he will contact to Thailand’s Prime Minister in a bid to resolve the problem of garbage disposal affecting the district.

The mayor announced on Wednesday (July 7) his intention to write to Prayut Chan-o-cha to intervene in the issue.

The problem over garbage collection has arisen after the contract to use a landfill site at the Thanarat Infantry Camp in Pranburi expired on July 1.

Hua Hin currently does not have its own waste disposal facility and an attempt to reach an agreement to use a site in Phetchaburi province has been unsuccessful. With nowhere to dispose of Hua Hin’s garbage, municipal officials last week started using a site just off Soi 102, which is located next to a number housing developments, including  Suksabai 1,2 and 3 and Laguna.

The use of the site as a garbage dump was done so without any warning, notice or prior consultation with local residents.

Since first breaking the story, Hua Hin Today has spoken to a number of people who live near the new site, with one person saying she could no longer open the windows and doors of her house due to the foul smell coming from the dump.

At a packed meeting on Tuesday night, concerned residents of Soi 102 seized the opportunity to share their frustrations with the mayor regarding the situation.

The mayor stressed that him and his team were doing all they can to find a solution and it is the intention that the Soi 102 site will only be used as a temporary measure. The mayor said he will try once more to reach an agreement to use the landfill site at the Thanarat Infantry Camp.

He has also said that he has submitted requests to use landfill sites in Kuiburi, Cha-am, Khao Yoi in Phetchaburi, Samut Sakhon and even as far away as Ayutthaya, all without success.

One local resident who attended the meeting and spoke to Hua Hin Today on Wednesday (July 7) fears the mayor’s intervention may be too little too late.

Local businesswoman Thita Coster lives on a housing development on Soi 102 close to the site. She said she can smell the rubbish from her property.

She said that on Wednesday morning she counted four trucks dumping rubbish on the site before 8am.

Thita said that the use of the site near her home is a major concern and questioned how  the situation has been able to arise in the first place.

“How is it that in more than 20 years, Hua Hin has not been able to build its own waste  disposal facility?”

According to Thita discussions at the meeting revealed that several companies have attempted to build such a facility over the past decade. But all the attempts have been rejected.

“The real issue here is why has the situation been allowed to happen like this”.

“The mayor said there are no plots of land big enough for a waste disposal facility”, Thita said.

However, Thita believes that land plots off the bypass road, close to the top of Soi 112, where a new road bridge has recent been constructed would be suitable.

With no solution on the horizon, the residents of Soi 102 could be faced with a mountain of trash in their neighbourhood.

Thita said that the mayor explained that trash would be piled up in the streets, if the Soi 102 site was not being used.

Meanwhile, locals from Nong Tapao village also submitted a formal complaint about the site to the Damrongtham Center in Hua Hin on Tuesday.

Citing environmental  and health concerns, the villages urged the authorities for find an alternative  solution.