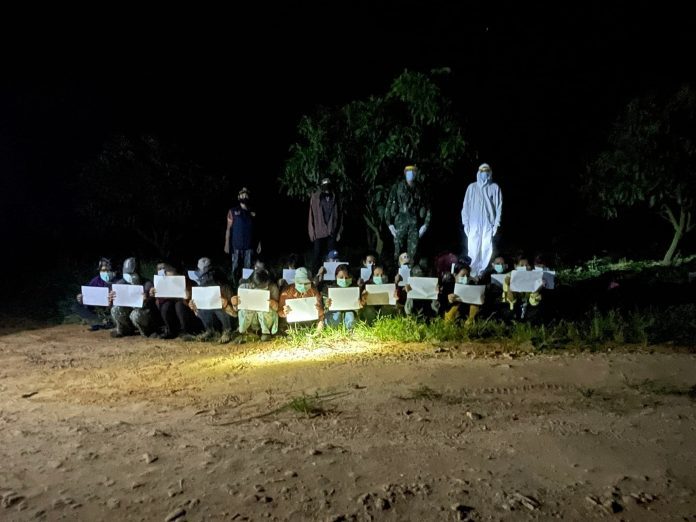 More illegal migrants from neighbouring Myanmar have been arrested after crossing the border in Prachuap Khiri Khan.

Over the weekend, 87 Burmese nationals were arrested trying to cross into Thailand along the natural border pathway.

Those arrested told border patrol officers they had entered into Thailand in hope of finding work in Samut Sakhon, Samut Prakan, Suphan Buri and Ratchaburi provinces.

On Saturday (Nov 21), a group of 21 migrants – 11 men and 10 women – were found hiding in a mango orchard in Ao Noi Subdistrict in Prachuap Khiri Khan. The group said they had travelled from Magway and Yangon and were waiting for a vehicle to collect them and send them to work in Samut Sakhon and Samut Prakan provinces.

The group said they paid a guide 15,000 baht each to be escorted over the border and given work.

Those arrested had their body temperatures checked and none reported a high temperature.

Meanwhile, it was reported that on Friday (Nov 26), a group of 58 migrants were arrested crossing the border through a natural pathway in Ko Lak Subdistrict, Mueang Prachuap Khiri Khan.

The group consisted of 32 men, 25 women, and 1 child. The group had travelled from, Mandalay, and were told they would be sent to Ratchaburi, Samut Sakhon, and Suphan Buri for work. They too had paid 15,000-20,000 baht per person to be escorted over the border.

Officials said that between a total of 87 migrant were arrested crossing the border illegally between 26 and 27 November.

All those arrested were returned to officials in Myanmar.