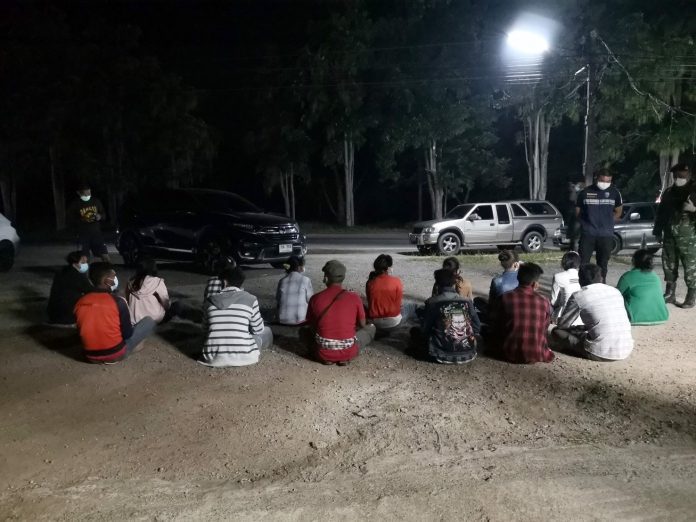 At around 1.30am on Monday (Dec 27) police arrested a 32 year old local man who works as a rubber tapper but is also involved in people smuggling.

Close to where the man was arrested, officers apprehended two Burmese nationals who also claimed to be rubber tappers. However, police suspected they were due to escort illegal job seekers from the border.

While being interrogated by police the 32 year old suspect received a call from someone speaking Burmese asking to meet them at a point along the natural border. Th quick thinking police then used the suspect’s car to drive to the meeting point close to the Don Singkhon were they found the 15 illegal workers – 6 males and 9 ladies, ranging in age from 18 to 34 and who had travelled from Mawlamyine and Dawei, respectively.

All of them had gathered in Mudong Village, about 3 kilometers from the Thai-Myanmar border, where officials were able to apprehend an 18-year-old man who also acted as a guide who escorted the group of workers to the meeting point.

The group said they had been trekking for about 5 hours to get to the meeting point. They told officers they had been promised work in Samut Sakhon province.

Those arrested will be returned to their homeland as part of a special agreement with the authorities in Myanmar.