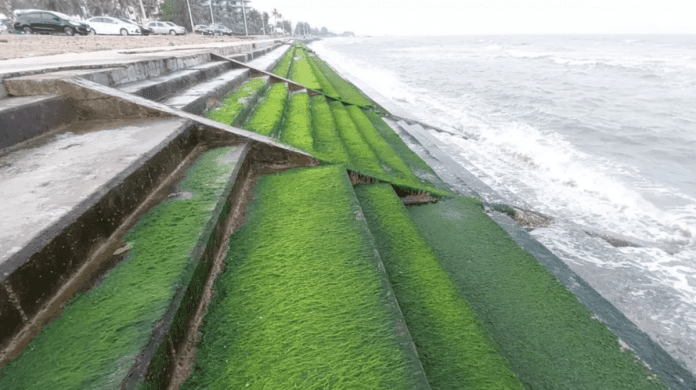 The steps at Pak Nam Pran beach in Pranburi have turned green after being covered in algae.

The algae, which covers the steps at the beach for more than two kilometres is the result of an annual natural phenomenon which is known to occur on the beach between November and January.

Locals described the appearance of the algae to be like green velvet covering the steps and said that it has a beautiful shine in the sunlight. Visitors to the beach were marvelling at the algae, which is best seen from noon to evening.

The algae, known as Ulva intestinalis, is edible and only occurs in clean water. The presence of the algae is of no harm to the local environment.

The algae should be present for only a couple of days before the exposure to the sunlight will dry it out turning it a white colour.

Visitors to Pak Nam Pran beach are warned to mind their step as the algae is very slippy.