Netizens say changes to Cha Am beach have resulted in the quaint and popular seaside resort losing some of its charm.

The complaints centre around steps constructed along the beach as part of a project to prevent coastal erosion.

Netizens say the steps are an eyesore and have permanently altered the natural layout of Cha Am beach.

A recent post by the Facebook page Beach for Life highlighting the changes to the beach gained traction online and was featured in a special report by Thai public service broadcaster Thai PBS.

Cha Am beach, a popular weekend destination for people from Bangkok, is known for its vast white sandy beach, netizens said.

However, all that has now changed.

Instead, the construction of the steps has meant that parts of the beach are only accessible in low tides. People sitting near the steps are often splashed with water from the waves and green moss and algae often forms on the steps, people said.

The steps have been installed as part of the “Rehabilitation and Landscape Improvement for Preventing Coastal Erosion at Cha-am Beach Project.”

Officials say the work was essential in order to prevent erosion along the coast.

The Department of Public Works and Town & Country Planning, which is responsible for the project, said the steps will eventually be installed along three separate areas of the beach totalling 3 kilometres in length.

The entire cost of constructing the steps will be in excess of 220 million baht. 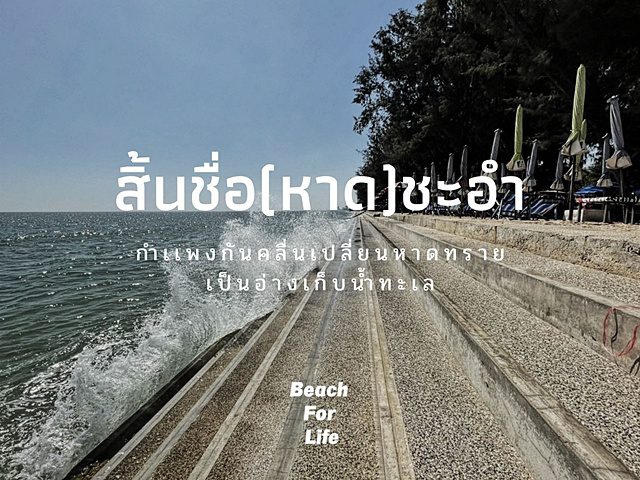