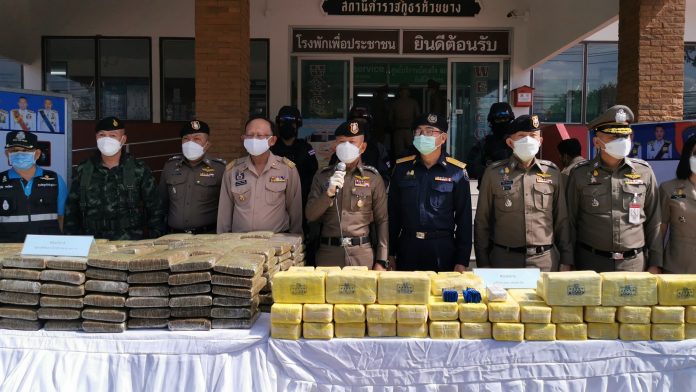 Police have announced the arrest of four suspects following the separate seizures of one million methamphetamine pills and 600 kg of cannabis sticks in Thap Sakae district.

Police said they arrested two men, who are both from Phang Nga province, on Monday (Dec 13) after failing to stop at a routine checkpoint.

Police said the pick up truck used by the men had approached the checkpoint at around  on Phekasem Road in Huai Yang at about 3.50am but drove off when it became they were about to be stopped.

Suspecting something was untoward, police followed the truck and eventually pulled the vehicle over a short distance away.

After searching the vehicle, police found the methamphetamine pills hidden among jasmine flowers in the back of the truck.

The men told the police they were due to be paid 20,000 baht each to transport the drugs to a location in Chumphon.

The men were charged with possession with intent to supply of a class 1 drug (amphetamines).

In a separate case, police in Thap Sakae also arrested a man and woman after 600kg of Thai cannabis stick was found in the back of their Mazda pick up truck hidden among empty beer boxes which had been covered with straw.

The couple said they were also paid 20,000 baht to transport the cannabis from Nong Khai to Lang Suan District in Chumphon.