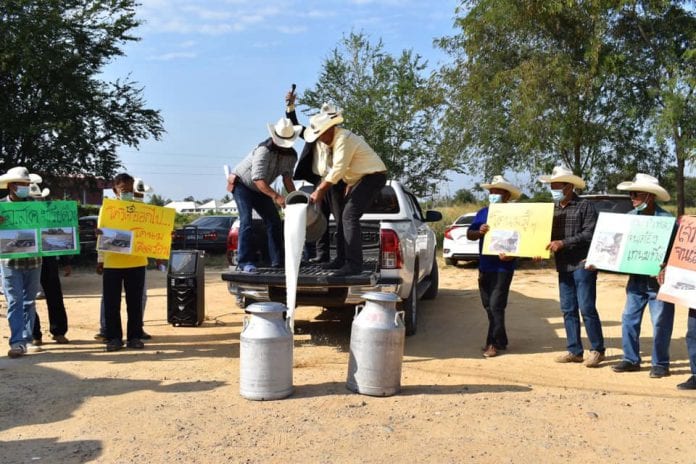 Held back by their frustrations, the dairy employees made their voices heard by pouring tons of raw milk in front of the Thai-Danish Dairy Cooperative office. In a similar incident earlier, workers from a dairy factory in Prachuap Khiri Khan and Phetchaburi provinces dumped 300 tons of raw milk that was bought from dairy farmers to produce pasteurised milk for schools children in the central and southern regions. Unfortunately, due to the month-long school closures in many regions caused by the Covid surge, the distribution of milk has been halted causing the raw dairy product to overflow the market. It was estimated that hundreds of tons of raw milk are now overstocked and the risk of it being spoiled is high.

The cooperative demanded the Dairy-farming Promotion Organisation of Thailand (DPO) to address the problem of oversupply of 60 tons of milk a day. The first round of negotiations have been unsuccessful and made the angry protesters poured the raw milk in front of the DPO office demanding the agency to take full responsibility, thus submitting the following proposals:

Conclusively, after a discussion of more than 2 hours, the two sides had not come up with a resolution as the Thai-Danish Dairy Cooperative Registrar confirmed that the production capacity is now in line with MOU and six other Thai-Danish dairy cooperatives. Nevertheless, the excess raw milk came over mainly in the wake of the school closure due to the Covid crisis.

As an overview, the country has an excess of overstocked raw milk and the continuous production capacity will be trapped in the packaging process and transporting the product will take roughly 30 days, adding more complications to the current predicament.

In this regard, the Ministry of Agriculture and Cooperatives acknowledged preliminary information and will further arrange for a possible resolution for all parties.