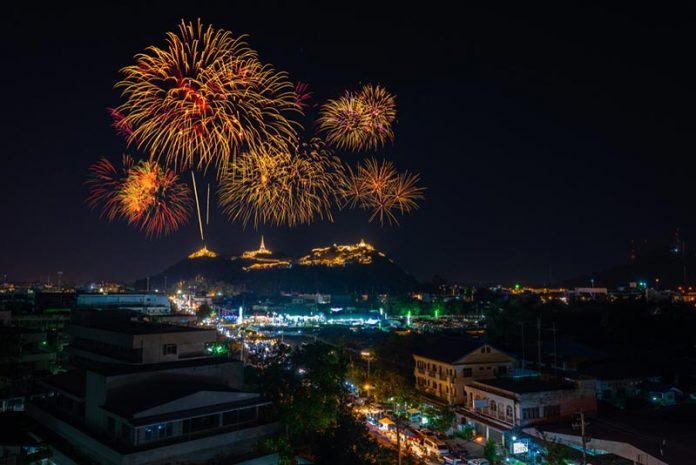 More details have been released about the Phra Nakhon Khiri Fair which is due to be held in Phetchaburi between 18-27 February.

The annual event, which honours Phetchaburi’s rich history and traditions as well as the former kings of Thailand, is held around Phra Nakhon Khiri, more commonly known as Khao Wang in Mueang district.

The event normally gets underway from about 4pm each day. Visitors can expect to see parades, lots of musical and dance performances and lots of street food stalls.

There’s a daily fireworks display too which normally takes place around 9pm, apart from during the opening ceremony when the fireworks are scheduled to begin at 7pm.

This year’s event will be the 35th Phra Nakhon Khiri Fair and will be held under the theme “Phetchaburi City of Gastronomy, Food Legends, and Inherited Culture to Praise and Honor the King.” The event will also host the “Phetchaburi Outstanding People” awards, which will recognise those who have made a significant contribution to the local community.

The event itself will be divided into three zones:

Zone 1, located at the King Mongkut Memorial Park Phra Nakhon Khiri, will house the centre stage for a wide variety of activities, demonstrations and musical performances.

The zone will also tell the story of Phetchaburi including its recent recognition as a UNESCO Creative City for gastronomy.

Lots of local food and produce including OTOP products, will be on sale from each of the eight districts in the province.

Zone 2, will be the area around Phra Nakhon Khiri National Museum (Khao Wang) which will have lights and colourful displays. The daily fireworks show will also take place here.

Zone 3, which will be located opposite Benchamathep Uthit School will be the location of a motor show event.

The event, which is very popular and can get very busy, is well worth attending for people living in Cha Am and Hua Hin.