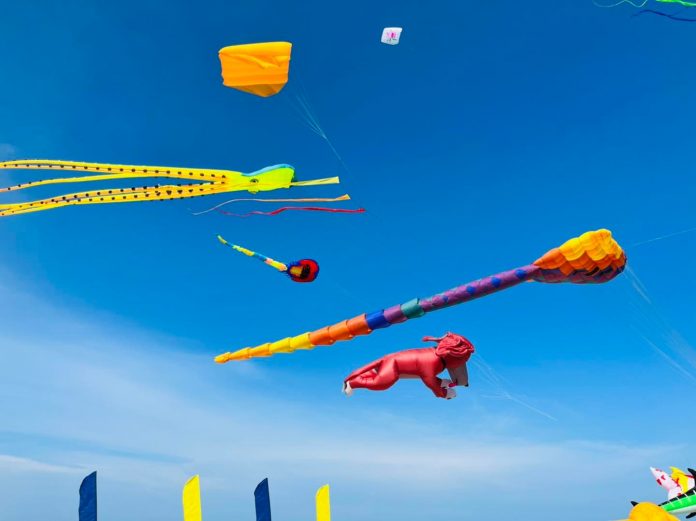 Thousands of kite enthusiasts and visitors descended on Cha Am beach to enjoy the Coloring the Sky kite festival.

The festival, which was held on the north-side of the beach between April 22-24, was organised by the Tourism Authority of Thailand with the aim of boosting tourism and the local economy.

Scores of kites of all shapes and sizes including birds, crabs, goldfish and spiders were flying in the sky, which made for the perfect photo opportunity for attendees.

Many photos from the event were shared across English and Thai language Facebook groups.

The festival also featured kite races, stunt performances and an aerial display to music, while the kids zone gave youngsters an opportunity to design their own kites.

Kathrin Fagersson, a resident of Hua Hin who attended the event with her family, said: “We thought the event was so much fun!”

“It was well organised with lots of effort behind it.

“There were good activities, shows and a nice selection of local food and drinks.

“We stayed for a lot longer than expected and the whole family really enjoyed it!”

Wayne Davis, who also lives in Hua Hin, said: “It is great to see events happening again, moving away from Covid into the future”.

“Lots of smiling (under the mask) people”, he added.

“I​ really​ enjoy​ed it. It made me feel like I was 12 years old again”, said Punyisa Chalauysophon.

“I also felt safe at the event as they​ check​ed our​ proof of vaccination before we entered and there were lots of announcements both in English and Thai.

“The event was really fun, relaxing, and​ there were lots​ of​ good​ food​ stalls also,”​ Punyisa said.